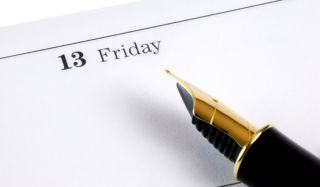 It is not certain where it began, but some believe fear of Friday the 13th started in Biblical times.
(Image: © rtimages | dreamstime)

No one knows for sure what's up with our odd fear of Friday the 13th, so ingrained in pop culture that it has a movie series and one mouthful of a phobia — paraskavedekatriaphobia — in its honor.

Folklorists think the dread goes back at least a few centuries, and may well trace its roots all the way to Biblical times, when the 13th guest at the Last Supper betrayed Jesus and caused his Crucifixion, which was held on a Friday. Whatever the origin, by the late Middle Ages both Friday and the number 13 were considered bearers of misfortune. That potent combo, more than any specific association with the date, is what has deemed Friday the 13th unlucky .

Today it's dismissed as an old superstition but — if given a choice — how many of us would eschew getting married, flying or giving birth on a Friday the 13th? Superstition, indeed.