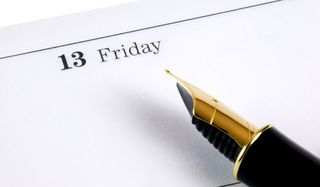 The number 13 is synonymous with bad luck. It's considered unlucky to have 13 guests at a dinner party, many buildings don't have a 13th floor and most people avoid getting married or buying a house on a day marked by this dreaded number.

But why is 13 unlucky? And is there any statistical proof to support the superstition?

"No data exists, and will never exist, to confirm that the number 13 is an unlucky number," said Igor Radun of the Human Factors and Safety Behavior Group at the University of Helsinki's Institute of Behavioural Sciences in Finland. "There is no reason to believe that any number would be lucky or unlucky." [10 Weird Things Humans Do Every Day, and Why]

Radun might very well be correct, but there are a few bits of scientific research that have given superstitious folk a little more cause for concern, even if the scientists who performed the work aren't necessarily alarmed by their findings.

For starters, a 1993 study published in the British Medical Journal indicates otherwise. Researchers analyzed the traffic flow and number of injuries from car accidents on the southern section of London's M25 motorway during the five months that the 13th fell on a Friday between 1990 and 1992.

They compared these numbers to data collected on Friday the 6th of the same months, and found that although there are consistently fewer vehicles on the road during the 13th — possibly as a result of superstitious people choosing not to drive that day, the researchers proposed — "the risk of hospital admission as a result of a transport accident may be increased by as much as 52 percent" on the 13th.

But before triskaidekaphobics, or those who fear the number 13, say "I told you so," it should be noted that although the data were authentic, the authors didn't mean for their conclusions to be taken seriously.

"It's quite amusing and written with tongue firmly in cheek," said Robert Luben, a researcher at the school of clinical medicine at the University of Cambridge and one of the study's authors. "It was written for the Christmas edition of the British Medical Journal, which usually carries fun or spoof articles."

Many people took the study at face value and it continues to be cited as valid evidence regarding the misfortune of both the number 13 and Friday the 13th.

"(Some people) clearly didn't understand that the paper was just a bit of fun and not to be taken seriously," Luben told Life's Little Mysteries. "Many also assumed that the authors were 'believers.' I'm sure that most of these people hadn't read the paper, which suggests that people being superstitious affects their behavior."

Since the 1993 study, other studies have been written showing that it's just women who have more accidents on Friday the 13th, with further studies determining that that's actually not the case. Other research results attempting to measure just how unlucky the number 13 is are mixed.

For example, in 2005, the United Kingdom newspaper The Telegraph analyzed the winning lottery balls dating back to when the UK National Lottery began in 1994. They found that the number 13 is the unluckiest ball, since it was drawn a total of 120 times since 1994, compared with the luckiest ball, number 38, which was drawn a total of 182 times. But, "of course, there is no way of predicting which balls will be luckiest in the future," the article cautions.

Not everyone has found similar patterns.

"Unfortunately, most of studies dealing with Friday the 13th and the number 13 are solely focused on statistical data, such as accident data, stock exchange data, etc., without any attempt to establish a 'direct' relationship between belief, or superstition, and behavior," said Radun, who is co-author of the 2004 study "Females Do Not Have More Injury Road Accidents on Friday the 13th," which was published in the journal BMC Public Health.

"Therefore, it is not surprising that contradictory results may occur … In our study, we did not find that either women or men have more injury road accidents on Friday 13th compared to previous and following Fridays," Radun added.

Luben agrees that studies about statistics surrounding the number 13 should acknowledge how people's superstitions influence how they act. He wrote in his study that "superstitions affect behavior in all cultures in all parts of the world in some form or other." So whether you vow to never play the number 13 in a lottery or declare that 13 is your lucky number just to go against the grain, the stigma surrounding the number still influenced your decision.

But many triskaidekaphobics, who count author Stephen King and former president Franklin Roosevelt among their ranks, don't need statistical evidence or hard facts to back up their conviction that the number is truly cursed. As with any superstition, no matter how irrational it may be, some people will still choose to believe in it.