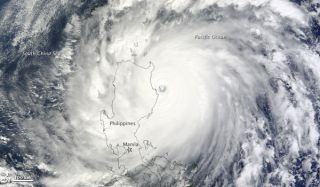 Typhoon Megi approached and made landfall in the northeastern Isabela Province of the Philippines on Oct. 18, 2010.
(Image: © Moderate Resolution Imaging Spectroradiometer (MODIS) on NASA's Terra satellite.)

Super-typhoon Megi made landfall early today (Oct. 18) in the Philippines, where the storm is known as Juan, and its wind speeds placed the storm in the highest classification for hurricanes Category 5.

Spanning more than 370 miles (600 kilometers), the mega-storm sustained winds of 178 mph (287 km per hour), according to the United States' Joint Typhoon Warning Center (JTWC). Megi was expected to intensify later this week and could reach China or Vietnam, according to China's National Meteorological Center.

"Super-typhoons are much more intense than regular typhoons ; they have a higher wind speed," said Harold Brooks, a research meteorologist at the National Oceanic and Atmospheric Administration (NOAA).

Megi became a super-typhoon when its wind speeds reached 130 knots, or 150 mph (241 km per hour) this is what designates a super-typhoon in the northwestern Pacific, according to the JTWC. A tropical cyclone must reach winds of at least 64 knots or 74 miles (119 km) per hour in order to be considered a typhoon.

"Super-typhoons are the equivalent of a strong Category 4 or 5 storm on the Saffir-Simpson scale," Brooks told Life's Little Mysteries, referring to the standard guide for measuring a storm's strength.

Typhoons rotate counterclockwise if they form in the Northern Hemisphere, while so-called "backward" storms, which rotate clockwise, form in the Southern Hemisphere. Clockwise-rotating storms are most common in the Indian Ocean and off the coast of Australia; backward hurricanes in the Atlantic basin are extremely rare.

"Typhoon" is the term used for powerful storms that form in the western Pacific and southeastern Indian Ocean, while "hurricane" refers to storms that start in the Atlantic, Caribbean and northeast Pacific. Typhoons are named by the World Meteorological Organization's Tropical Cyclone Program, but the Philippine Atmospheric, Geophysical and Astronomical Services Administration has its own naming system, which is why Megi is also known in the Philippines.