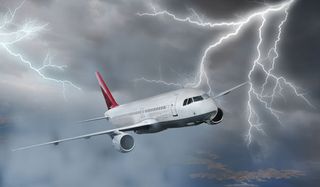 Commerical planes are hit by lightning about once a year, by some estimates.
(Image: © Dreamstime)

Airplanes get struck by lightning frequently. Fortunately, they're built to handle it.

The average commercial airliner gets hit by lightning a little more than once a year, according to Lightning Technologies Inc., a Massachusetts-based company that manufactures lightning protection for aircraft. Sometimes the plane itself triggers the lightning by flying through charged clouds, resulting in static discharge off the aircraft.

Lightning has, on occasion, brought down planes. The last commercial aircraft crash caused by lightning in the United States occurred in 1963 over Elkton, Md. According to the National Transportation Safety Board (NTSB) report, a lightning strike ignited a fuel tank, causing the "explosive disintegration" of the left outer wing. All 81 passengers and crew perished.

Most of the time, however, planes weather lightning just fine. The NTSB database, which contains reports on more than 140,000 aviation accidents dating back to 1962, lists only 24 incidents caused by lightning strikes, including the Elkton crash. Most of the other 23 incidents involved small private planes or helicopters (and in one case, a hot-air balloon). And only four other incidents involved fatalities, for a total of 11 deaths.

Why doesn't getting hit with a 30-million volt bolt of electricity faze most aircraft? Careful engineering protects them.

Most plane bodies are made of aluminum, which conducts electricity around the shell of the plane without letting it in, according to Lightning Technologies, Inc. Electronics and navigation equipment are grounded and protected from electrical surges. Fuel tanks are tested to ensure they can withstand a lightning strike without allowing dangerous sparks.

But all of that engineering doesn't mean pilots get a pass on flying into thunderstorms: NTSB reports are littered with accidents caused by severe turbulence , icy conditions and nasty crosswinds.

Got a question? Email it to Lifes Little Mysteries and we'll try to answer it. Due to the volume of questions, we unfortunately can't reply individually, but we will publish answers to the most intriguing questions, so check back soon.