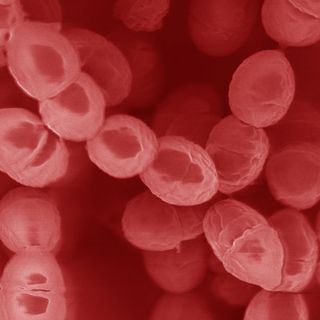 As anyone who's watched a Packers game or chowed down on a velvety hunk of cheddar knows, Wisconsinites are serious about their cheese. So serious, in fact, last week the State Assembly voted 56 to 41 to honor the bacterium Lactococcus lactis with the title of official state microbe. And while it may seem odd for legislators to pick a bacterium to represent their constituency, Wisconsin is hardly alone in elevating weird organisms to public posts.

The tradition of naming a state flower dates back to the 1800s, but it wasn't until the 1970s that states started to get weird with it. In 1972, California designated the California Dogface Butterfly (Zerene eurydice) the state insect, and many other states shortly followed suit. Of course, a state insect doesn't seem that strange in comparison to Texas, Oklahoma, and Virginia, all of which have a state bat, or to Wyoming, Texas, New Jersey, and Maryland, which have state dinosaurs in addition to their state fossils. Seventeen states even have a designated state grass.

However, North Carolina may give Wisconsin its best competition for having a weird official organism. North Carolinians have both a state carnivorous plant and a state freshwater trout. Although the Channel Bass was voted state fish in 1971, the General Assembly of North Carolina specifically designated the Appalachian brook trout the state freshwater trout in 2005, because, as the bill reads, these unique fish are woven into the historical and cultural fabric of Western North Carolina. That same year, the state legislature wrote that the Venus flytrap became the official carnivorous plant because, it is a mysterious and wonderful natural resource.

But North Carolina's legislature had better figure out which bacterium best represents their state if they want to stay competitive in the strange state organism race.