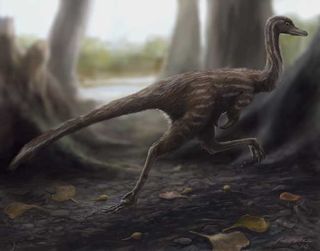 One of the smallest known dinosaurs, Xixianykus zhangi (shown here in a reconstruction) was built for quick running. A shorter upper leg relative to its lower leg helped the dinosaur carry its weight more efficiently.
(Image: © Matt van Rooijen.)

A newfound ant-eating dinosaur was one of the smallest known and also one of the best adapted for running, scientists revealed.

A farmer discovered the fossil skeleton of the roughly foot-and-a-half-long creature, named Xixianykus zhangi, in southern Henan in China. The dinosaur lived in a warm, temperate forested environment watered by rivers and lakes alongside duck-billed dinosaurs and likely sail-backed predators known as spinosaurs roughly 89 million to 83 million years ago. Scientists aren't sure how the dinosaur perished, but the fossil is fairly intact compared with many, so another creature probably did not kill it.

This minute hunter possessed a number of adaptations for quick, highly efficient running, with features of the hind limb, pelvis and backbone that would have promoted stability and reduced superfluous, energy-wasting movements as it dashed across prehistoric landscapes.

The dinosaur also had a short upper leg in comparison with its lower leg, a trait seen in many running animals.

"It helps you be more efficient by pulling the weight up the leg so you don't have to move it as far," said researcher David Hone. "Try running with 2 kilograms [5 pounds] strapped to your thigh and then strapped to you ankle. You'll be much faster and tire less with it higher up, as you don't need to spend lots of energy swinging it through a big arc. Making the lower leg long also helps quite simply by giving you a bigger stride — you cover more distance per step."

The dinosaur was a theropod, which includes famous carnivores such as Tyrannosaurus rex and Velociraptor. Its closest relatives within the theropod group known as the alvarezsaurs had short but strong arms, tipped with a single massive claw to break into logs or insect nests. Although the forequarters of Xixianykus did not stand the test of time, it likely fed in the same way, digging for termites and ants.

"It may sound odd, but digging and running actually work quite well together," Hone said. "Some modern termite-eating species travel long distances between colonies of their prey, so as an efficient runner Xixianykus would have been able to follow this pattern." Some of the adaptations that helped to stabilize the dinosaur's body when running might even have braced it when digging, the researchers noted.

Many alvarezsaurs probably shared the fast-paced approach to life Xixianykus had, the researchers noted. Any small dinosaurs would be vulnerable to predators, "and the ability to make a speedy exit if danger threatened would be valuable to an animal like this," Hone explained.

The scientists detailed their findings online March 29 in the journal Zootaxa.