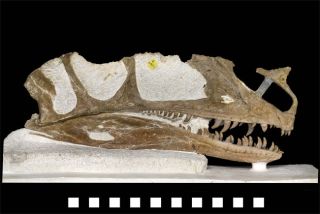 The skull of Proceratosaurus, a relative of T. rex that lived about 170 million years ago, was tipped with a nose horn, whose function the study researchers have not determined.
(Image: © copyright Natural History Museum.)

Spanning just 10 feet in length and sporting a tiny horn on its nose, a newly identified dinosaur has become the oldest known relative of the fierce meat-eater, Tyrannosaurus rex. The discovery suggests such tyrannosaurs were quite petite before they evolved into giant killing machines just before their demise.

The dinosaur, called Proceratosaurus, lived some 170 million years ago. "We can say conclusively it's the earliest representative of the line of evolution that led to Tyrannosaurus," said study researcher Angela Milner of the Natural History Museum in London.

The group of huge carnivores called tyrannosaurs ruled the land about 85 million to 65 million years ago when a mass extinction event wiped them out along with most dinosaurs and many other animals and plants.

Another miniature T. rex of sorts that lived about 125 million years ago was described just recently from remains unearthed in northeast China.

"In other words, tyrannosaurs for a long time were a group of quite small animals going back through time. And they only got suddenly very large right toward the end of the age of dinosaurs," Milner told LiveScience.

The latest discovery involves a skull, measuring just 11 inches (30 cm) long, that was dug up during an excavation near Minchinhampton in Gloucestershire, England. When it was first described in 1910, scientists thought the remains came from a Megalosaurus (not a type of tyrannosaur).

Then, in the late 1920s, a German scientist found that the skull belonged to a different species of meat-eating dinosaur, which is when it got its current name. But only recently have scientists figured out exactly how this horned beast fits in with other dinosaurs and its link with the prehistoric Hollywood star.

The image showed three suites of features specifically found in T. rex and its relatives: specializations of its teeth, large windows in the side of its skull, and air spaces inside the skull. For instance, rather than knife-like teeth found in some carnivorous dinosaurs, Proceratosaurus had banana-shaped front teeth like T. rex.

"The tyrannosaurs fed by a puncture-and-pull technique using the mouth to bite down on prey and just pull pieces off," Milner said. "Some other kinds of meat-eating dinosaurs had slicing teeth."

And the skull windows, or openings, would've allowed this dinosaur, like T. rex, to have a powerful bite.

"The side of the skull is composed of a series of engineering struts, and they allow the skull to be much lighter and provide a lot more area for muscles that open and close the jaws," Milner said. "They can actually bulge through these windows."

The new finding is published in the most recent issue of the Zoological Journal of the Linnean Society.