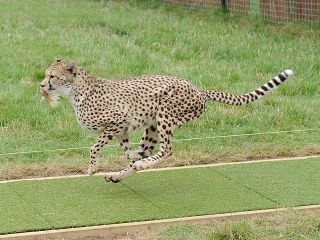 In an animal Olympics, the cheetah would take the gold for fastest animal.
(Image: © Jim Usherwood)

If animals held their own Olympics, there’d be several gold medal winners for speed.

On land, the cheetah’s long skinny body would cross the finish line first at the sprint distance. Its strong muscles are equipped to run fast for short distances. A cheetah can dash up to 70 mph.

In comparison, humans are sluggish. Michael Johnson holds the world record for a fastest human at 23 mph. And he ran only 200 meters.

Even T. Rex could outrun most of us at its 18 mph pace.

In the air, a peregrine falcon would win a speed competition. It goes from 55 to 270 mph when it dive-bombs prey.

In water, a sailfish blows the competition away. Its streamlined body can travel up to 68 mph.

In 2006, University of California Berkeley biologist Sheila Patek announced that the mandibles of the trap-jaw ant had the fastest predatory strike in the animal kingdom. At 145 mph, that’s a fast eater.