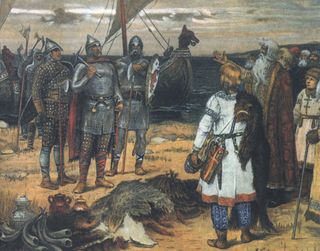 The Vikings were a seafaring people from the late eighth to early 11th century who established a name for themselves as traders, explorers and warriors. They discovered the Americas long before Columbus and could be found as far east as the distant reaches of Russia.

While these people are often attributed as savages raiding the more civilized nations for treasure and women, the motives and culture of the Viking people are much more diverse. These raiders also facilitated many changes throughout the lands from economics to warfare.

Many historians commonly associate the term "Viking" to the Scandinavian term vikingr, a word for "pirate." However, the term is meant to reference oversea expeditions, and was used as a verb by the Scandinavian people for when the men traditionally took time out of their summers to go "a Viking." While many would believe these expeditions entailed the raiding of monasteries and cities along the coast, many expeditions were actually with the goal of trade and enlisting as foreign mercenaries.

The Viking Age generally refers to the period from A.D. 800, a few years after the earliest recorded raid, until the 1050s, a few years before the Norman Conquest of England in 1066, according to Angelo Forte, Richard D. Oram and Frederik Pedersen, authors of "Viking Empires" (Cambridge University Press, 2005). During this time, the reach of the Scandinavian people extended to all corners of northern Europe, and many other nations found Vikings raiding their coasts. The farthest reported records of Vikings were in Baghdad for the trading of goods like fur, tusks and seal fat.

A Viking raid on the monks of Lindisfarne, a small island located off the northeast coast of England, marked the start of the Viking migration from Scandinavia in 793. This location was a well-known abbey of learning, famous throughout the continent for the knowledgeable monks and its extensive library. During this raid, monks were killed, thrown into the sea or taken as slaves along with many treasures of the church, and the library itself razed. This single event set the stage for how Vikings would be perceived throughout the Viking Age: savage warriors with no respect for religion or appreciation for learning.

In the years that followed the initial raid, coastal villages, monasteries and even cities found themselves besieged by these sea-based foreign intruders. Due to the frequency of sea attacks, many developments were made in developing fortifications in the forms of walled-in harbors and sea-facing stone walls, defenses that proved to be quite effective at deterring raids.

The reason behind these attacks is a topic of debate among academics, though the reasons often stem from such things as the Christian persecution and forced baptism of pagans to reduced agricultural outputs in the Scandinavian region. Many more documented reasons might have prompted these people to leave their cold and harsh homes to seek out the means to survive elsewhere. Yet, despite how unforgiving their homeland may have been, most Vikings still returned to their homeland at the end of each season with treasure, slaves and goods to survive yet another winter.

At the heart of the Viking culture lies the Viking ship. These extraordinary vessels — longships in particular — shaped the lives of the sea-faring Norse and changed the course of European history.

Honed for more than 10 centuries, the ship-building skills of the Norse led to a variety of vessels — from small fishing boats and big-bellied cargo vessels to the famous lightning-fast longships used for raiding. But no matter the size, most of the ships were designed to be narrow in shape with short drafts (vertical distance between waterline and bottom of ship), features that gave them high adaptability for use in the ocean and rivers.

The Vikings' ship-building craft reached a high point in the 7th century when they invented the keel, a structural beam that runs from the bow to the stern and sits lower than the main body of the ship. This feature increased speed and stability and prevented unwanted lateral movement, according to Yachting & Boating World. The keel, along with the addition of a large mast and sail, would ultimately allow the Norsemen to make long journeys across the North Atlantic. These vessels are now looked back upon as revolutionary in design and a technological miracle.

To begin the ship-building process, the Vikings would drive wedges into freshly-cut trees until the wood split along the grain. Up to 20 great oaks might be cut down for a ship. The wood was shaped and arranged so that the planks fit together perfectly in a clinker construction, overlapping like a fan. In clinker shipbuilding, the outside is started first, and then the frame is put inside it, according to the living history site Regia Anglorum. The ship was coated with a watertight mixture of tar-soaked animal hair, wool or moss and stabilized with iron rivets. The end result was an incredibly fast and flexible longship that nothing could catch.

The men rowed with a series of oars, supplemented with a large sail most likely made of wool. Rather than a rudder, the longships had a steerboard fastened to the right-hand side of the ship at the stern, according to Royal Museums Greenwich.

By the middle of the 9th century, the raids really picked up as word spread across the Norse region of Europe's removable wealth. Norse villages and communities came together to build ships with the intention of improving their lives through the business of raiding. In 842, Vikings ruthlessly attacked Nantes on the French coast, and because of their ability to maneuver up rivers, they went on to raid towns as far inland as Paris, Limoges, Orleans, Tours and Nimes, according to History.com.

The Vikings paid as much attention to art as to craft. The longships were usually adorned with carved dragon heads at the bow, which were believed to keep evil spirits away. The dragon head coupled with a large square, red-striped sail would come to be known as the signature of the Vikings. The sight would strike fear into the hearts of Europeans for three centuries.

The Vikings set up colonies on the west coast of Greenland during the 10th century. The Viking sagas tell of journeys they undertook from these Greenland colonies to the New World. They mention places named "Helluland" (widely believed to be Baffin Island), "Markland" (widely believed to be Labrador) and "Vinland" (a more mysterious location which some archaeologists believe could be Newfoundland).

At present the only confirmed Viking site in the New World is located at L'anse aux Meadows on the northern tip of Newfoundland. That site was excavated in the 1960s. Additionally there are three possible Viking sites that archaeologists have recently excavated in Canada. Two of the possible sites are located in Newfoundland while a third site is located on Baffin Island in the Canadian Arctic.

One possible Viking site is located at Point Rosee in southern Newfoundland; at the site, archaeologists found a possible bog iron roasting hearth beside a structure made with turf. Another possible Viking site is located at Sop's arm in Newfoundland and includes a series of "pitfalls" that would have been used to trap large animals such as caribou. These pitfalls are arranged in a straight line, and archaeologists believe that the Vikings could have driven the animals toward these pitfalls where the animals could have been trapped and killed. At the third possible Viking site, located at Nanook on Baffin Island, researchers found artifacts that may have been used in metal production and the remains of a structure that may have been built by the Vikings.

Many modern perceptions of Vikings found their origins through Catholic propaganda. Upon the sacking of multiple Christian facilities and the loss of countless relics and treasures, the Catholic ministry sought to dehumanize them. Until Queen Victoria's rule of Britain, the Vikings were still portrayed as a violent and barbaric people. During the 19th and 20th centuries, perceptions changed to the point where Vikings were glamorized as noble savages with horned helmets, a proud culture and a feared prowess in battle.

With regards to the more popular Viking myths created through these misperceptions, the following are proven to be clearly false according to historical record:

While the living conditions in Scandinavian regions were certainly harsh and made a hard people, many Vikings suffered from the scarcity of resources and the people set up their homes over great distances with no real unified leadership. During the Viking Age, the Scandinavian people were able to make a stronger push to the outside worlds and create a reputation for themselves beyond simple barbarism. While some Vikings were driven with the lust for riches, many sought more peaceful economic relationships with the surrounding nations.

Indeed, as Forte et al wrote, there was no dramatic end to the Viking Age. The authors contend that the Scandinavian kingdoms were slowly acculturated and integrated into the "wider body politic of European Christendom."