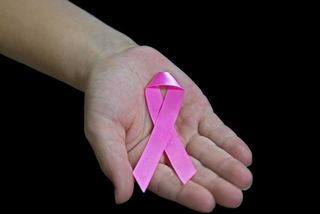 Pink ribbons have become a symbol of the fight to cure breast cancer.
(Image: © Maria Dryfhout, )

Women who are genetically predisposed to breast cancer, such as actress Angelina Jolie, face a difficult dilemma in terms of their options, experts say.

In a New York Times Op-Ed article, Jolie revealed today (May 14) that she had a double mastectomy to prevent breast cancer. Jolie said she carries a mutation in the BRCA1 gene, which significantly increases her risk of developing the disease.

For those with BRCA gene mutations, deciding what to do can have psychological and financial implications, and affect family members as well as the patient, said Dr. Myra Barginear, a breast medical oncologist at the Cancer Institute of North Shore Long Island Jewish Health Systems in New York.

Ultimately, the decision is an individual one made by a woman in consultation with her doctor, Barginear said. Factors such as a woman's family history of the disease, and whether she has had children can sometimes play a role in her choice, she said. Jolie's mother died of breast cancer at age 56.

According to the Susan G. Komen Foundation, a nonprofit organization that funds breast-cancer research and advocates for patients, a double mastectomy can reduce the risk of developing breast cancer by 90 percent or more for women at high risk. (Jolie said her risk before her surgery was 87 percent and is now less than 5 percent). Some women choose to have this procedure because "it eases their worries about getting breast cancer," the Komen Foundation says.

But there are also other options.

For instance, women may decide to undergo "active surveillance" for breast cancer, meaning they will get tested for the disease early and often. It is recommended that women at high risk of breast cancer get both a mammogram and an MRI every year starting at age 25, and a breast exam every six to 12 months, the Komen Foundation says. These tests do not decrease the risk of getting breast cancer, but may diagnose cancer in its early stages, Barginear said.

Chemoprevention, or taking medication to reduce breast-cancer risk, is another option. However, the medications — such as Tamoxifen, an estrogen blocker — are only suitable for some women, and can increase the risk of blood clots and uterine cancer, the Komen Foundation says. There is also little information regarding how much the treatment reduces breast-cancer risk among BRCA-mutation carriers, and researchers are still studying which high-risk women would benefit most from the treatment.

Women with BRCA mutations are at increased risk for breast and ovarian cancer, though the exact risk for an individual will vary depending on other factors.

Factors such as having a family member with breast cancer, as Jolie did, further increase breast-cancer risk, said Annette Lee, an associate investigator at the Feinstein Institute for Medical Research in Manhasset, New York.

The BRCA1 and BRCA2 genes are thought to keep cancer in check by repairing damage to DNA, Lee said. Mutations in these genes interfere with this repair.

"If you can't repair DNA, you accumulate mutations, and that contributes to the development of cancer," she said.