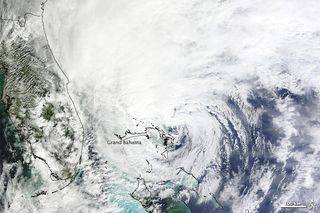 As Hurricane Sandy moves closer to the East Coast, it presents a variety of threats, such as flooding, high winds, snow, storm surges and the possibility for power outages.

Here's a look at the major concerns from the storm:

The system itself is enormous, and is forecast to drop large amounts of rain from North Carolina to Long Island, N.Y., between which Sandy is likely to make landfall.

It could also create blizzard-like conditions farther inland, perhaps as far west as central Ohio, forecasters said during a news conference by the National Hurricane Center (NHC) this afternoon (Oct. 26).

All of this precipitation creates the risk for flash flooding, especially in mountainous areas like the northern Appalachians and in the center of Sandy's storm path, the NHC reported.

The storm is predicted to drop 4 to 8 inches (10-20 centimeters) of rain in far eastern North Carolina, according to current NHC forecasts. It's too early to forecast totals for the rest of the East Coast, but it's expected to be a fair amount, said NHC branch chief James Franklin. The storm is also slow-moving, meaning affected areas could expect rain and wind for two to three days, he said. [How To Prepare for Hurricane Sandy]

When large amounts of rain fall in a short period of time, or when rain falls steadily for many hours, the ground can become unable to soak up all the water and flash floods can occur.

Sandy is currently packing maximum sustained winds of 75 mph (120 kph), with higher gusts, making it a Category 1 hurricane on the Saffir-Simpson scale, the scale used to measure hurricane strength.

Winds of more than 50 mph (80 kph) are expected over much of the East Coast, said Louis Uccellini, director of NOAA's National Centers for Environmental Prediction, during the news conference.

The Frankenstorm is likely to intensify after passing over the Gulf Stream, and strong winds will be produced when it collides with a cold front exiting the East Coast, similar in some ways to what happened with 1991's Perfect Storm. This could lead to winds reaching speeds of up to 100 mph (160 kph) in some areas, according to several of the models used to predict the hurricane's effects.

This creates risks for buildings, possibly including skyscrapers in New York City and other large cities, as wind speed increase with height in the atmosphere. But a more widespread problem is posed by trees in the mid-Atlantic and Northeast, most of which haven't yet lost their leaves. These fully-leaved trees are more likely than bare trees to lose limbs in strong winds, which can create property damage, hurt people and knock down electrical lines, leading to power outages, said Jeff Weber, a scientist with the University Corporation for Atmospheric Research in Boulder, Colo.

Another risk is the storm surge, the mass of water pushed ashore by an incoming storm. The risk for this is high throughout the area Sandy is expected to make landfall. The chances for a damaging storm surge could be higher thanks to the full moon that will happen on Monday, Oct. 29. Storm surges can cause flooding in low-lying coastal areas, damage property and present a real risk to human life.

Already, Hurricane Sandy is responsible for at least 25 deaths in Haiti, primarily due to flooding, according to various news reports. At least 11 were reported dead in Cuba, two killed by falling trees, according to reports.

"It's our obligation to be prepared," said New York City mayor Michael Bloomberg in an afternoon news conference. He added that wherever the storm hits, it's likely to bring a lot of rain and potentially high wind and storm surges to the city. "Common sense says you should take precautions now," he said.