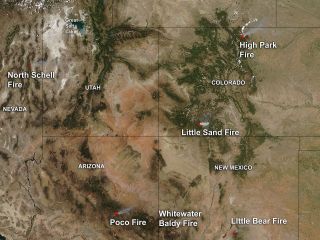 The many wildfires raging across the parched southwest United States can be seen in one view in this image taken by NASA's Aqua satellite on June 19.

The wildfires currently burning in the West include the High Park fire in Colorado, one of the costliest in the state's history. Centered to the west of Fort Collins, Colo., it has burned 130 square miles (337 square kilometers), according to InciWeb, the interagency system that tracks U.S. fire-related incidents. It has already cost nearly $30 million to put the fires out, and 2.2 million gallons (8.3 million liters) of water have been dropped on the fire, according to InciWeb. The fire was 45 percent contained as of this morning (June 25).

Colorado currently has more than half a dozen wildfires burning, the worst fire season for the state in more than a decade.

Meanwhile, New Mexico's Whitewater-Baldy fire continues to smolder. The largest wildfire in state history, it has chewed through 465 square miles (1,205 square km) of forest near Glenwood, N.M., since it was ignited by lightning on May 16.

In southern Colorado, the Little Sand Fire is generating a thick plume of smoke in the Aqua satellite image. The fire is located 13 miles northwest of Pagosa Springs and has so far consumed 34 square miles (87 square km).

Red flag warnings are in effect across portions of 10 states, meaning "a combination of strong winds, low relative humidity and warm temperatures will create explosive fire growth potential," according to CNN.