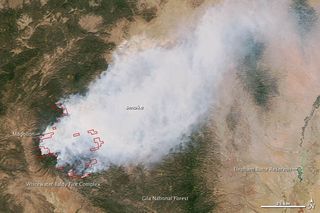 May 30, 2012, a wildfire burning in Gila National Forest in southwestern New Mexico had burned more of the landscape than any other fire in the state
(Image: © NASA.)

A NASA Earth-observing satellite has snapped a photo of the huge wildfire chewing up vast swathes of southwestern New Mexico.

The Whitewater-Baldy fire, which was sparked by a lightning strike on May 16, has burned roughly 377 square miles (976 square kilometers) as of today (June 4), making it the largest wildfire in New Mexico history. NASA's Aqua spacecraft captured a view of the conflagration from space, showing vast plumes of smoke billowing over the rugged Gila National Forest near the borders with Arizona and Mexico.

More than 1,000 firefighters have been battling the blaze, which remains less than 20 percent contained. The area's rugged terrain has hampered progress, as have strong winds.

Though Whitewater-Baldy is big, it currently pales in comparison to some other wildfires that have torched the continental United States. For example, last year's Wallow Fire— which spread from an unattended campfire in eastern Arizona — burned 841 square miles (2,178 square km).

The great Yellowstone fire of 1988 burned nearly three times that much land, scorching roughly 2,340 square miles (6,060 square km) across Wyoming, Montana and Idaho, including much of Yellowstone National Park. And a 1910 blaze in Idaho and Montana covered about 4,700 square miles (12,173 square km), killing nearly 90 people in the process.

Before Whitewater-Baldy grew so large, New Mexico's biggest wildfire had been the Las Conchas blaze, which burned 244 square miles (632 square km) in 2011 in the northern part of the state.