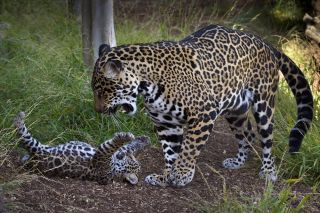 A jaguar cub bats at his full grown mother playfully while she stands protectively over him. The mother jaguar, named Nindiri, brought her two cubs out of their den for the first time last week.  For the last two months, the young cubs, who were born April 26,  have been living in the cave area at the Harry and Grace Steele Elephant Odyssey Exhibit that serves as their den.   The move to an outdoor area is a big one for the little jaguars. They are taking their time, getting comfortable with the new smells and sounds as they carefully venture out.   Although these two youngsters may look adorable now, adult jaguars can range from 70 to 249 pounds (32 to 113 kilograms). Jaguars are the largest cat in the Western Hemisphere and the third largest of the world's cats. The South American native word for jaguar, yaguara, means "animal that kills in a single bound."