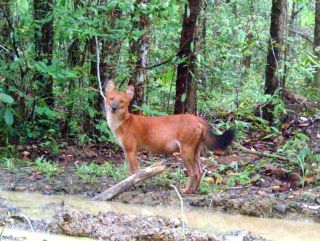 The elusive and endangered dhole, or Asiatic wild dog, has been found roaming the forests of four nature reserves in Thailand. Working with photographs snapped by camera traps set up in 15 Thai parks, researchers have created the first map showing where dholes in this region likely live and what areas are suitable habitats for them.

The wild dogs favor areas deep within parks, far from humans. Enhanced protective programs near forest edges could help preserve dholes, which are more likely to be shot or poisoned when they come too close to civilization.

The four-year study found that only 7 percent of the land in Thailand is suitable for dholes, and much of it is outside protected areas. There are no records of dholes being spotted outside of parks, though, according to the study, published in the journal Mammalia. But the scientists hope to soon look in these places, perhaps setting up camera traps there, a statement suggests.

Dholes were mostly likely to be found in locations with populations of sambar and red muntjack, types of deer that are a favorite prey of the dogs. The wild dogs also favored grasslands and open forests, and occurred in locations that were also home to leopards, probably owing to the fact that both animals prefer similar prey.

"When we look at why a species is declining and how to conserve it, we have to understand that the individual species is not the only factor," said Kate Jenks, the study's lead author, in a statement. "We can't solve the problem until we also understand the natural environments in which the endangered species live."

The next step in the research will be to determine the precise size and stability of dhole populations and to determine whether the animals live outside of protected areas, Jenks said.

Dholes are a shadowy species that range throughout parts of India, Bhutan, Burma, Thailand, Vietnam, Cambodia, Malaysia and Indonesia. The International Union for Conservation of Nature lists them as endangered, with fewer than 2,500 left in the wild. Their biggest threat is habitat loss.