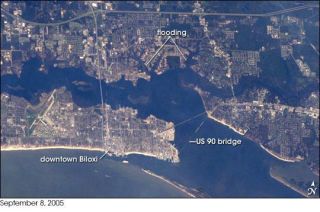 Some 70 percent of the shoreline of the Gulf of Mexico is vulnerable to heavy erosion from the impacts of even the weakest hurricanes, according to a report released just in time for the start of the 2012 Atlantic hurricane season today (June 1).

The research, conducted by scientists with the U.S. Geological Survey (USGS) using computer models, could help emergency managers for coastal areas prepare for hurricane threats to their beaches and communities.

"The Gulf Coast's beaches provide abundant recreational opportunities, contribute substantially to the local economy, and demand the highest real estate values," said USGS director Marcia McNutt. "This important research raises awareness on the specific nature of the vulnerability of these beautiful beaches to impacts from even Cat-1 hurricanes so that property damage can be minimized through proper planning."

Hurricanes generate both high waves and storm surge, which can combine to erode beaches and flood low-lying coastal lands. Storm surge is an abnormal rise in water that occurs when strong winds push water forward, ahead of a moving storm. Huge waves form on top of the surge, cresting and pounding the coast.

"Beaches along the Gulf of Mexico are extremely vulnerable to erosion during hurricanes, in part, because of low elevations along the coast," said Hilary Stockdon, a USGS research oceanographer and lead author of the study.  "For example, the average elevation of sand dunes on the west coast of Florida is 8 feet [2.4 meters]. On Florida's Atlantic coast, the average is 15 feet [4.6 m]." [Infographic: Barriers to Storm Surge]

The model used in the study showed that Category 1 hurricanes (which have winds between 75 and 94 mph) along the Gulf generate wave heights and storm surge that combine to raise water levels at the shoreline by 14.5 feet (4.4 m) more than their normal levels.

The study also found that about 70 percent of the Gulf Coast was vulnerable to overwash, which occurs when waves and storm surge overtop sand dunes and wash the sand inland.

For Category 1 storms making landfall along the U.S. portion of the Gulf Coast, 27 percent of sandy beaches could be inundated, the model showed. For Category 5 storms (the strongest hurricanes, with winds above 157 mph), 89 percent of these beaches are likely to be inundated during a direct landfall.

A similar report evaluating erosion hazards along the East Coast is planned for later this year.