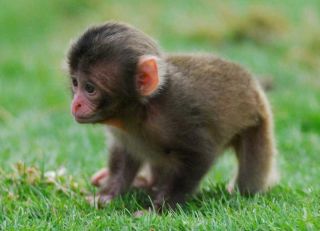 There's been a monkey baby boom at a zoo in Scotland, which recently welcomed three adorable Japanese macaques.

The three infants were born to three different mama monkeys between April 21 and 25, and the furry, three-week old babies are still too tiny to venture far from their mothers at Highland Wildlife Park.

With the new arrivals, there are now 21 Japanese macaques — also often known as snow monkeys — living at the Highland Wildlife Park.

A monkey named Angara is the dominant female of the group, and also a first time mother, making her new arrival a very important addition to their social group.

It will be a while yet before keepers are able to tell what sex the babies are, so they won't be named until then, but keepers are already noticing their different characters starting to come through — one in particular is a little more boisterous than the others!

Japanese macaques are found throughout Japan, living in large troupes in woodland and sub-tropical forests. With their bright red faces and white fur, the monkeys are instantly recognizable.

These primates are fully adapted to seasonal climate changes — temperatures in Japan can plummet to as low as 5 degrees Fahrenheit (minus 15 degrees Celsius) in the winter, making their Scottish highland home ideal.