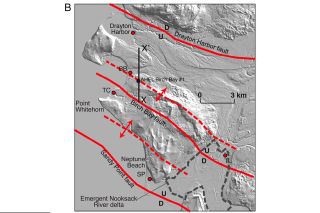 Tectonically speaking, there's a lot going on in the Pacific Northwest. From the Cascadia subduction zone, where the Juan de Fuca tectonic plate is slowly pushing its way underneath the North American plate, to the Seattle Fault, where Native American legends recorded a massive earthquake 1,100 years ago, the region has its fair share of seismic hazards.

Now add to that three more potentially dangerous faults in the Bellingham Basin, a tectonically active area along the coast of Washington, near the Canadian border. A team of researchers has discovered active tectonic faults in this region nearly 40 miles (60 kilometers) north of any previously known faults.

"We've known for a long time that the whole Pacific Northwest region is contracting very slowly north-to-south, at the rate of a few millimeters per year," said Richard Blakely, a geologist with the U.S. Geological Survey in Menlo Park, Calif., who was part of the study. "It doesn't sound like very much, but when you concentrate that contraction on specific faults, they can become rather dangerous."

The faults Blakely and his colleagues found are reverse faults — a type of tectonic fault where one side is shoved up over the other side — and the team estimates they're capable of triggering magnitude-6.0 to -6.5 earthquakes. [Most Dangerous Places on Earth]

"That's big enough to cause damage and hurt people, but it's not as severe as a magnitude-7 earthquake, such as the one that occurred on the Seattle fault 1,100 years ago," Blakely told OurAmazingPlanet.

The team found the new faults through a bit of collaborative luck, Blakely said. He had been examining maps of magnetic anomalies in the region and noticed clues pointing to several unidentified faults in the area. When his colleagues in Washington showed him LiDAR images — data collected by an airborne laser tool that showed scarps (steep banks formed when a fault ruptures) in exactly the same areas — and paleoseismic records that indicated past earthquakes had shoved the ground upward several feet, they knew they had found something.

The three faults the team identified are located near Birch Bay, Sandy Point and Drayton Harbor, all along the Pacific coast of northern Washington, about 20 miles (32 km) north of the city of Bellingham.

They’re about 40 miles (60 km) north of where geologists previously thought active faulting ended in the Bellingham Basin, opening a new swath of the Washington coast to seismic hazards.

What's more, the team traced the faults from onshore to offshore, meaning that when they do rupture, they could trigger an underwater earthquake.

"This is a big 'if’=,' but if they ruptured again along their entire length, some of that rupture would be out in the water, and there might be a tsunami hazard related to that," Blakely said.

But Washington residents and their Canadian neighbors don't necessarily need to worry about that happening anytime soon. The researchers didn't find enough paleoseismic evidence to say how often major quakes occur along these faults.

The last time an earthquake occurred along the Birch Bay and Sandy Ridge faults was at least 1,000 years ago, Blakely said, and moving at a rate of only a few millimeters per year, it could take some time to build up enough tension to produce another quake.

The team's findings were published March 30 in the Journal of Geophysical Research.