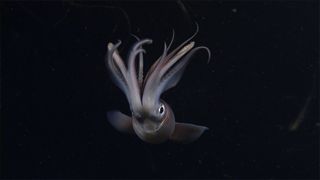 Humboldt Squid swimming about 1,000 feet (300 meters) below the ocean's surface in waters off the central California coast.
(Image: © Courtesy of the Monterey Bay Aquarium Research Institution. )

Large squid that live in the Pacific Ocean regularly dive to astounding depths, according to new research. The revelation has researchers scratching their heads over how the big cephalopods manage to stay active in the harrowing conditions in the deep waters.

Humboldt squid, creatures that that can grow to more than 6 feet (2 meters) in length and weigh as much as 100 pounds (45 kilograms), dive to low-oxygen waters a mile (1.5 kilometers) below the ocean surface, according to a report from the BBC.

Tracking tags affixed to the animals revealed the squid spend several hours at this depth, "then they go back up and continue their normal daily swimming behavior," Stanford researcher Julia Stewart told the BBC.

"It's just a really impressive, really fast, deep dive through what is quite a harsh environment," she said.

A mile below the ocean surface, there's very little oxygen in the water, and researchers thought the large animals would be hampered in such a harsh environment. Yet the tags revealed the squid stay fairly active, swimming between 3 and 6 feet (1 and 2 meters) per second — nearly as fast as they swim in surface waters.

The tracking tags stay on the squid for almost a month. At an appointed time, the tags detach from the animals and float to the ocean surface, where they transmit temperature and depth data to a satellite, which then sends the information on to researchers.

Humboldt squid live in the eastern Pacific Ocean from the tip of South America up to Mexico, but have been moving farther north in recent years.

Fierce predators, the squid feed on fish, crustaceans and mollusks — and sometimes each other — shredding their prey with barbed tentacles and a sharp beak the size of a baseball.

Infamously ill-tempered, Humboldt squid are sometimes called red devils, not only because of their aggressive behavior, but because like other squid they can change color in the blink of an eye, morphing from white to red to deep purple.