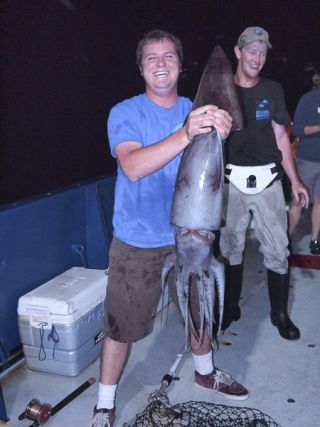 An elusive species of jumbo squid that all but vanished from its usual haunts in 2010 moved north in search of food, according to marine biologists. And it seems the squid like their new feeding grounds.

Humboldt squid, which feed off small, bioluminescent fish called lantern fish off the Baja California coast, left their usual feeding grounds in the winter of 2009 to 2010, mystifying scientists who went to study the squid and found only a few small specimens, spread out over much larger than usual areas. But fieldwork by Stanford University biologist William Gilly reveals that the large squid had simply packed up and moved 100 miles (161 kilometers) north because of El Niño weather patterns.

"It was obvious that the squid were pretty screwed up," Gilly said in a statement. [Under the Sea: A Squid Album]

Will swim for food

Usually, cold, nutrient-rich water upwelling from the deep Pacific provides a thriving ecosystem of fishy prey for Humboldt squid, which normally grow to weigh 30 pounds (13.6 kilograms) and are known for their fierce temperaments. But during El Niño weather, nutrient-poor tropical water from the open ocean flows into the Sea of Cortez by Baja and displaces all that cold, nutrient-rich water.

Without the phytoplankton nourished by this water, the food chain falls apart. Searching for more fertile grounds, large Humboldt squid made it to the Midriff Islands, farther north in the Sea of Cortez. There, strong tides that are unaffected by El Niño drive upwelling. Elsewhere in the Sea of Cortez were little one-pound squidlets that were reproducing at least twice as early as Humboldt squid usually reproduce.

According to Gilly, the big squid and the small squid were following two different survival strategies.

"Squid can move to an area of tidal upwelling, which remains productive during an El Niño, and continue on their merry, giant-squid lifestyle and live to spawn when they are a year and a half old," Gilly said in a statement. Or they can move away from land into an open-ocean environment, where food is less abundant but the supply is steady, as its availability doesn't depend on upwelling.

"It is comparatively meager fare and you will not get to be a big giant squid, so instead you reproduce when you are six inches long. It is a different strategy, but it works," he said.

Gilly and his colleagues expected to see a return to squid normalcy off the Baja coast when they returned this year. But large squid are still hanging around the Midriff Islands, the researchers found. Elsewhere in the Sea of Cortez, the squid are still small.

The recovery is slower than expected, but it is happening. The small squid were about 25 percent larger than they were 2010, and there were more hanging around the old lantern fish feeding grounds. Part of the reason that the squid haven't returned sooner, Gilly said, is that their generational memory is very short. Even in normal conditions, Humboldt squid live only 12 to 18 months, and the small early reproducers were only living to be about 6 months of age. Memory of where to go for the best lantern fish buffet likely died with the last generation to spend a lot of time there.

Mexican fishermen rely on Humboldt squid, so the creatures' slow recovery has economic consequences. Scientists and fishing regulators are working to maintain a stable squid fishery, Gilly said. In the meantime, he suspects that each new generation of squid will gradually rediscover the lantern fish feeding grounds and grow large again.