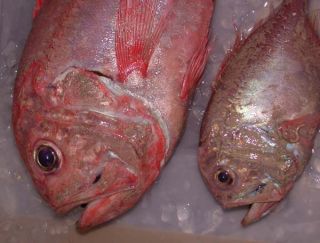 Deep-sea dwelling orange roughy, like these, can live more than a century making them vulnerable to overfishing.
(Image: © Image courtesy of R. Waller in the NE Atlantic / NOAA)

Most deep-sea dwelling fish should be off-limits, say a group of researchers who argue that, in most cases, we cannot harvest fish from these vast parts of the ocean without depleting them.

Fish in the deep sea tend to be long-lived and reproduce only periodically, making their populations particularly easy to deplete. Add in destructive fishing practices, weak regulation, government subsidies and economic incentives to overfish, and it becomes clear that, with few exceptions, the deep seas should not be open to fishing, they argue. Instead, they propose, fishing should be limited to more productive, shallow waters.

"We are not recommending we stop all fishing, we recommend we stop all fishing that is not demonstrably sustainable," said Elliott Norse, president of the Marine Conservation Institute in Washington state and the lead author of the team's paper, which appeared online recently and is set to be published in the March 2012 print issue of the journal Marine Policy.

But this position is controversial; others argue that deep-sea fishing can be done sustainably, so that the fish populations remain at levels where they can replenish themselves. Opponents of the deep-sea fishing ban also say casting such a broad net is "sound-bite environmentalism," when in reality, certain fisheries are sustainable.

"Rather than saying we simply need to close them, what they should have done is say what conditions need to be met in order to have [an] effective and sustainable management system," said Ray Hilborn, a professor of aquatic and fishery sciences at the University of Washington.

The open ocean resembles a vast, watery desert that does not produce much life. Much of the deep water below appears featureless, but there are oases rich with life, often teeming around features, such as seamounts where fish gather to breed, according to Norse and his team. [Dangers in the Deep: 10 Scariest Sea Creatures]

In recent decades commercial fishing has moved farther offshore and deeper into the water, harvesting many species from their last refuge as well as less resilient species, they write.

The species that live in the deep seas, below 656 feet (200 meters), inhabit cold, dark waters with variable access to food, so they tend to grow slowly, mature late, live longer and produce offspring periodically, rather than regularly.

For example, fish known as orange roughy live in waters on continental slopes and seamounts in many parts of the world. Orange roughy grows slowly, reaches maturity at about 30 years old, and can live for more than century.

For example, orange roughy lives in waters on continental slopes and seamounts in many parts of the world. It grows slowly, reaches maturity at about 30, and can live for more than century. Fishing for orange roughy began near New Zealand in 1970s. Over time, fisheries elsewhere opened up, but catches plummeted. Stock assessments are often highly uncertain, partly because of a lack of understanding of the fish's biology, they write.

The authors point out Black scabbardfish caught near Portugal as a rare example of a sustainable deep-sea fishery, because Portugal allows only small boats casting hooks and lines to catch scabbardfish, not the larger trawlers that fish for them elsewhere in the world.

In particular, they take aim at bottom trawling, which involves towing a net along the seafloor. Norse labels it "by far, the most destructive" type of fishing. This practice destroys ecologically important life on the seafloor, such as corals and sponges, and also captures and kills creatures other than the target fish, creating a sort of collateral damage called bycatch, he said.

The deep seas fall both within the areas individual countries control, called their Exclusive Economic Zones, and beneath the high seas, which are areas of the seas not controlled by any country or state. While prospects for setting up sustainable systems within most nationally controlled fisheries are dim, sustainability is even less likely for high seas fisheries, they write.

Long-lived species, like many of those residing in the deep seas, can and are being sustainably managed, according to Hilborn, who believes that fisheries in general are better off than the dismal image with which they are often portrayed.

He cited as an example the geoduck, a large clam turned delicacy that inhabits deepwater off the Pacific coast of Canada, Alaska and the western U.S. It, like the orange roughy, has a century-plus life span. Also, sablefish, which Norse's team ranks as a vulnerable deep-sea species, are also caught sustainably along the west coast of Canada and the U.S., Hilborn said. [Image Gallery: Freaky Fish]

"There is no question these stocks pose management concerns," he said of the deep-sea species discussed in the paper. "I'd say the biggest problem with them is measuring the abundance."

A lack of good data on abundance appears to be at the root of the vanishing stocks of orange roughy, according to Hilborn.

"One of our major concerns is that environmental advocates make global generalizations about deep-sea fishing, and the deep-sea fisheries in every ocean are quite different," Shotton said. "I am fed up with sound-bite environmentalism."

For instance, the association's members' trawls are highly targeted, with the nets being towed at precise depths for a maximum of 20 minutes, not hours as happens elsewhere, he said. The association has also voluntarily adopted limits, including declaring protected areas off-limits to fishing and limiting each of the four member companies to one boat on the water at a time, he said. This was possible because two of the member companies have ties to Australia and New Zealand, countries with strong conservation ethics when it comes to their fisheries, he said.

He noted, however, that the association has no control over others fishing the same waters.

Not all important fish caught in the deep seas have the sort of life history traits that can make them highly vulnerable to overfishing. For example, the primary target species in the Southern Indian Ocean, the alfonsino, lives only about 15 years, a span more comparable to a shallow water fish, Shotton said.

On the high seas

The high seas offer open access fisheries to all nations, creating what is called the "tragedy of the commons" — meaning nations have the right to fish there, but no one has an interest in taking responsibility for the fisheries.

Countries have banded together to create Regional Fisheries Management Organizations to regulate high seas fisheries, but these are only now being established for deep-sea fisheries within the high seas, according to Hilborn. These are the areas of biggest concern, and they need management institutions and scientific programs that are similar to those within national waters, he said.

"The legitimate question is: Are they worth it?" Hilborn said, referring to the deep-sea fisheries outside individual nations' control. "It is quite possible there isn't the economic value or food production value that would make it worth spending the money required to do the science and management.

Correction: This article was updated at 6:26 pm ET to correct an inaccurate description of the geoduck. It lives in shallow water, not the deep sea.