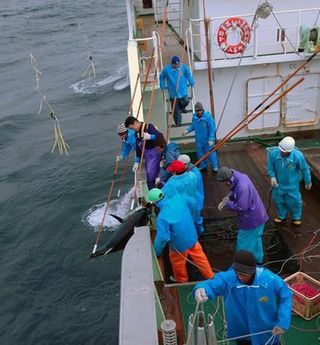 New research questions whether humans are in fact eating up the ocean's big, predatory fish, then moving on to smaller marine species further down the food chain. This idea — called "fishing down the food web"— was introduced in 1998.

The idea has served as a widely adopted measure for assessing the state of the world's oceans and fisheries. And the new research found it led to inaccurate conclusions in nearly half the ecosystems where it was applied.

Contrary to results using the traditional measure of ocean health, the new study found that on a global scale, predatory fish are not being replaced in nets by prey fish. Rather, catches of many big predator fish, like bigeye tuna, have increased along with those of many smaller species, from the Japanese anchovy down to the filter-feeding American oyster, according to the researchers, led by Trevor Branch of the University of Washington. [On the Brink: A Gallery of Wild Sharks ]

It's not clear what this means for marine diversity on a global scale, Branch said.

The concept that we are working our way from the top of the marine food chain down is based on an indicator called Mean Trophic Level (MTL), in which species are assigned a value according to where they fit in the food chain. A predatory fish, like bigeye tuna, which eats shrimp, mackerel and other smaller tuna, fits at the top of the scale, while the American oyster, whose dietary staple comprises tiny plants, is at the bottom.

In 1998, a group of researchers led by Daniel Pauly at the University of British Columbia put forth the provocative paradigm when they reported that the MTL of landings, or fish sold, had declined (meaning relatively fewer big fish) from 1950 to 1994, particularly in the Northern Hemisphere, according to data from the United Nations Food and Agriculture Organization.

"This may imply major changes in the structure of marine food webs," Pauly and his team wrote in an article published in 1998 in the journal Science.

But according to Branch and his colleagues' critique, the MTL of fish catches does not reliably show what is going in ecosystems. They came to this conclusion by comparing the MTL of catches with data from trawl surveys — conducted by researchers — and stock assessments for fish populations. Both of these are measures of the abundance of fish in the ocean, rather than what is coming up as catches in fishermen's nets.

When comparing the methods, the team found the survey and assessment data conflicted with the catch data in about half of the cases for which the comparison was possible.

"So, if you were to flip a coin that would give you almost as accurate a picture," Branch said.

Pauly finds numerous flaws with Branch’s research. He maintains that "fishing down the food web" occurs throughout local ecosystems, pointing out that other studies in more narrowly defined ecosystems, such as in Argentine-Uruguayan waters, have shown declines in MTL. But the phenomenon is masked on a global scale, because the new research does not account for the expansion of fisheries, he told LiveScience.

This would happen because when fishermen move into new, unexploited waters, like the high seas, they will have access to larger, predatory fish, like tuna. (Branch, meanwhile, points out that expansion of fisheries is a reason why catch MTL is a flawed metric, as compared with surveys and assessments.)

Pauly also points out that the study significantly over-represents the developed world, leaving out large swaths of the world's oceans around Asia, Africa and South America, areas where survey and assessment data are not available.

Moreover, he wrote in an e-mail, the scenario being put forth "flies in the face of everything we know in fisheries, and generally in biology, where long-lived organisms (e.g., trees, elephants) are more easily overexploited than short-lived, small ones (e.g. grasses, mice)."

While it is more difficult for a long-lived organism higher up on the food chain to recover from harvesting since they have slower growth rates and reproduction rates, there isn't necessarily a connection between the life span of an organism and what fishermen are motivated to bring in, according to Ray Hilborn, one of Branch's colleagues at the University of Washington. For example, geoduck clams are highly valued and can live for 140 years; however, as filter feeders they are low on the food chain, he said.

The bottom line is that our knowledge of what is going on in the oceans is skewed, according to Joseph Powers of Louisiana State University. He was not involved in either study.

"We know a great deal about the impact of fishing on a large number of species," he wrote in an e-mail, referring to the data used in Branch's study. "However, most of these species are economically important, but not necessarily ecologically important. More research is needed on the indirect effects of fishing on the ecosystem."