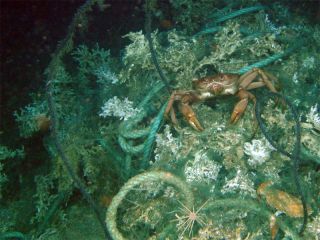 Here, a trawl is entangled on cold-water corals in the Northeast Atlantic Ocean. Cold-water corals are one of the deep-sea habitats most vulnerable human impacts.
(Image: © Jason Hall-Spencer. Copyright Ifremer/AWI.)

As technological advances allow humans to explore deeper in the seas than ever before, revealing the vast biodiversity in Earth's largest ecosystem, the result has also meant more exploitation, researchers say.

In a new review of data from the world's deep seas, a team of more than 20 scientists has found which human impacts are having the most deleterious effects on the deep sea and which will be most important in the future. They also identify the specific deep-sea habitats most vulnerable to human impact.

"We predict that from now and into the future, increases in atmospheric CO2 [carbon dioxide] and facets and consequences of climate change will have the most impact on deep-sea habitats and their fauna," the researchers write online Aug. 1 in the journal PLoS ONE.

Though the deep seafloor covers 73 percent of the oceans, only the area equivalent to a few football fields has been sampled biologically, the researchers say. Scientists continue to discover new habitats and species, but the negative impacts of human activity appear to be much faster in reaching the great depths of our oceans, the study's scientists note.

Their analysis showed that litter in the past was the main human impact on deep-sea habitats; though dumping and littering in the oceans was banned in 1972, the authors say their consequences are still present today, together with the continuing illegal disposal of litter from ships.

"The deep seafloor is, for most people, out of sight and therefore, often, out of mind," the researchers write. "This has encouraged, for centuries, the dumping of waste of all sorts into deep waters, with (largely) unknown and unstudied effects on the habitats and their fauna. Although dumping waste and litter into the sea is now legally banned, the problem persists because of the historical accumulation of marine litter in all the world's oceans."

Litter and contaminants also reach the deep sea from coastal areas and where rivers discharge. In particular, the accumulation of plastics on the deep seafloor, which degrade into microplastics — called mermaid tears — that fauna can consume, has unknown, yet likely important, consequences. There is increasing evidence of the accumulation of chemical pollutants, such as mercury, lead and persistent organic pollutants (such as dioxins and PCBs) in the sediment and deep-sea organisms.

Currently, the authors found, the largest direct impacts come from the exploitation of deep-sea resources, particularly from fisheries. In the future, however, the most pervasive impacts may come from ocean acidification and climate change. Some of the effects from acidification and climate change include: an increase in water temperature, accumulation of nutrients (which can lead to algal blooms and contribute to dead zones), and changes in ocean circulation.

The researchers predict that all of these human factors will have combined, and deleterious, impacts on deep-sea habitats in the future.

Those habitats most vulnerable to human impacts are: benthic (along the seafloor) communities on sedimentary upper slopes, cold-water corals, seafloor communities in canyons, and both seafloor and open-water environments along seamounts.

In the near future, mineral extraction at hydrothermal vents and possibly on abyssal plains could also put these habitats at risk.

Their conclusions come from an international study conducted during the Census of Marine Life project SYNDEEP (Towards a First Global Synthesis of Biodiversity, Biogeography, and Ecosystem Function in the Deep Sea).