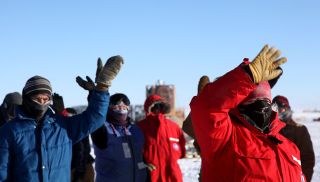 Winter is looming at the Amundsen-Scott station at the South Pole.
(Image: © Sven Lidstrom. )

On a sunny day earlier this month, a heavily bundled crowd waved goodbye to a giant plane — and their only physical link to the outside world — as the last flight left the South Pole before the onset of Antarctic winter.

With the departure of the massive LC-130 cargo aircraft on Feb. 15, the crew of about 50 people who remain at the United States' Amundsen-Scott Research Station are cut off, save for some Internet and phone access, for the next eight months, reported The Antarctic Sun.

For about six of those months, the Amundsen-Scott staff — cooks, facilities workers, and a handful of scientists — will see only darkness beyond the station's windows. At the South Pole, the sun sets in March and doesn't rise again until austral summer returns, in September.

Antarctica is the coldest, highest, driest and windiest place on Earth, and conditions at the pole, in the middle of the East Antarctic Ice Sheet, are particularly severe. In winter months, temperatures can plunge below minus 100 degrees Fahrenheit (minus 73 degrees Celsius).

The United States built the first permanent structure at the South Pole in 1957 (which was blown up in 2010), and has maintained a year-round presence ever since.

Humans first set foot at the South Pole 100 years ago, and the gleaming research station that now stands there is named in honor of the first two people to make it to the desolate spot.

Norwegian explorer Roald Amundsen reached the pole on Dec. 14, 1911. A month later, on Jan. 17, 1912, British explorer Robert Falcon Scott arrived, only to find he'd lost out to Amundsen. Scott and his men, ill-prepared for the advancing Antarctic winter, perished on their return trek.

A century later, science in Antarctica is going strong, and the researchers who spend winters at the South Pole are investigating some epic, existential questions.

The high elevation and clear Antarctic air allow telescopes to peer back at the light that remains from the young universe, and an underground experiment at the pole captures neutrinos — ghostly particles that bombard the Earth yet rarely interact with anything they meet — which may help answer why we live in a universe dominated by matter.