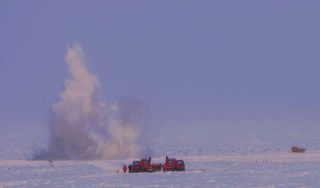 Only a select few ever make it to the South Pole. Still fewer get to blow things up there. And only one man has the distinction of blowing up a piece of real estate at the South Pole that he once called home.

"It was a little sad, but the day goes on," said John Rand, a consulting engineer with the U.S. Army's Cold Regions Research and Engineering Laboratory (CRREL).

Last December, the Antarctic Sun recently reported, Rand was part of a crew charged with dynamiting a piece of history — the very first permanent dwelling ever built at the South Pole. [Related: Extreme Living: Scientists at the End of the Earth.]

In the decades since it was constructed in the mid 1950s, the long-abandoned outpost was swallowed up by the ever-shifting snows of the frozen continent. And, after a frightening accident, the original South Pole station had to go.

Rand, a specialist in drilling ice cores — long cylinders of ice pulled up from glaciers — passed his first South Pole stay at the station, a four-month exercise in long hours, isolation and bachelor living, from late 1971 to early 1972.

Even then, the station was 15 or 20 feet (4.5 or 6 meters) below the surface. Chambers called top hats — giant boxes with roughly the same dimensions as the station's identical buildings — had been stacked atop the structures to keep their roofs above the snow, which tends to compact and thus sink under a building while snow blows in and piles up around it.

"In essence, the terrain is rising," said George L. Blaisdell, operations manager for the National Science Foundation's U.S. Antarctic Program, who explained that the physics at work at the South Pole makes building there difficult. "The elevation at the South Pole hasn't changed in the last 50 years," Blaisdell told OurAmazingPlanet, "but if you put something on the surface and came back a year later, it would be further down in the snowpack."

That's precisely what happened to the old South Pole station. By the time Rand helped blow the station up in December, it was 30 feet (9 meters) below the surface. However, the long-abandoned station once played a pivotal role in scientific and world history.

First in, never out

The original station was a no-frills military affair — essentially a series of glorified boxes made from sturdy wooden beams and plywood. The research base was built by the Seabees, the Navy's construction unit; building on the structure began in late 1956 and the station was dedicated in January 1957.

The project stemmed from the International Geophysical Year (IGY), an 18-month period of coordinated scientific endeavor from July 1957 to December 1958, when countries including the United States, the then Soviet Union and several European nations sent thousands of researchers out into the wild and little-explored regions of the planet to push the boundaries of Earth science.

The Americans christened the base the Amundsen-Scott IGY South Pole Station, to honor the only other humans to ever set foot at the Pole ahead of the seminal construction. People had first and last been to the Pole nearly five decades earlier in 1911, during the famed race that pitted Norwegian explorer Roald Amundsen against doomed Englishman Robert Falcon Scott. (Amundsen won the race, and Scott died on the return journey from the pole.) [Related: In Images – Race for the South Pole.]

At the conclusion of the IGY, when the time came to pack up and go home, the Americans decided to stay put in their little station at 90 degrees south latitude. Not only was great science happening at the South Pole, but a permanent U.S. station at the literal convergence of the planet's longitude lines had enormous strategic value.

"The U.S. felt that by being at the geographic South Pole, we would have something of a claim, if you will," Blaisdell said, "and having been there longer than anyone else, be able to put pressure on other people trying to divvy up Antarctica."

The Americans' extended stay in Antarctica and at the Pole was one of several geopolitical circumstances that paved the way for the Antarctic Treaty, signed in 1959 — the world's first nuclear arms agreement and a milestone international decision to leave the frozen continent free of territorial claims by any country. The treaty is still in force today.

The original Amundsen-Scott station was largely abandoned in 1974 for a newer station nearby, constructed under a dome. That station, in turn, was recently abandoned for a brand new Amundsen-Scott facility, dedicated in 2008 — a gleaming construction perched atop 36 stilts that can be ratcheted higher when the snow begins to encroach.

Rand said the original station, invisible beneath the snow, was marked out on the surface by flags that covered an area about 150 by 300 to 400 feet (45 by 90 to 120 meters). To prepare to demolish the station, Rand and his colleagues drilled a warren of holes down to the topmost level of the buried station and threaded dynamite down into the snow.

Over the course of three days in early December, the charges were detonated, collapsing the roof of the station and creating a large crater in the snow. Rand said it was with mixed emotions that he watched the explosions shoot snow high into the air.

"It was truly the end of that station. The year before it was intact and now it's put to bed," Rand said. However, he said, it had to be done. The area was dangerous.

A year earlier, despite the visible network of flags marking the perimeter of the site, a giant tractor somehow ended up atop the former station. The snow collapsed beneath the weight of the massive machine, which crashed through the top roof of the old station.

The driver wasn't hurt, but ended up at the bottom of a 30-foot (9-m) hole. He was quickly retrieved by crews on harnesses, but getting the tractor out proved to be tricky.

The accident was a wake-up call, according to Blaisdell and Rand, and the wheels were put in motion to remove the danger.

"A year before a friend almost got hurt badly, and we needed to solve that problem," Rand said. "And that's what we did."

The giant crater that remains where the station once stood has already begun to fill up with snow, and Blaisdell said the area would be safe for new construction soon, perhaps as early as 2013.

With its high altitude, dry conditions and extreme vantage point, the South Pole offers some of the best observing conditions on Earth, and the newly opened-up real estate is highly coveted among scientists brimming with ideas.

"It's just a matter of deciding which ones have the best possible payoff," Blaisdell said.