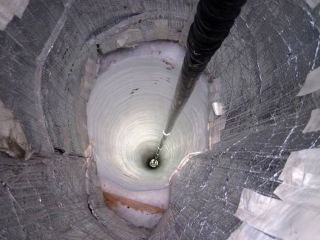 A sensor descends down a hole in the ice as part of the final season of IceCube.
(Image: © NSF/B. Gudbjartsson.)

The world's largest neutrino telescope – made from a giant cube of ice at the South Pole – aimed at detecting subatomic particles traveling near the speed of light has been completed, researchers announced today (Dec. 20).

Construction of the IceCube Neutrino Observatory ended Dec. 18 (New Zealand time), although it's already been collecting data on the tiny particle for several years.

Neutrinos are sub-atomic particles that travel near the speed of light. Some neutrinos come from the sun, while others come from cosmic rays interacting with the Earth's atmosphere and astronomical sources such as exploding stars in the Milky Way and other distant galaxies.

Trillions of neutrinos stream through your body at any given moment, but they rarely interact with regular matter. As such they offer a unique probe into the most violent processes in the universe involving neutron stars and black holes. They may even reveal insights into dark matter, the invisible substance that physicists think makes up most of the matter in the universe.

But neutrinos are difficult to catch. So scientists are using ice, and lots of it, to watch for that rare neutrino that crashes into one of the atoms making up the molecules of water ice.

The giant telescope was built in the ice of the Antarctic plateau at the South Pole. The final stretch of construction ended with the drilling of the last of 86 holes for the 5,160 optical sensors that are now installed to form the main detector.

Such sensors and detectors will watch for muons, which are particles created from neutrino-ice-atom collisions. In the ultra-transparent ice that exists at such depths, the muon radiates blue light, which is detected by IceCube's optical sensors. The muon preserves the direction of the original neutrino, and as such, points back to its cosmic source.

The size of the observatory — a cubic kilometer of ice — is important because it increases the number of potential collisions that can be observed. In addition, the type of ice at the South Pole is perfect for detecting the rare collisions. Most ice contains air bubbles and other pockets that would distort measurements.

But at the South Pole, it's basically a giant glacier consisting almost entirely of water ice. The ice there is under extreme pressure, and as more and more snow falls, the ice gets squashed until it is at its purest. That means loads of atoms inside the ice to up the chances of a crash. [The Harshest Environments on Earth]

How it was built

A 4.8-megawatt hot-water drill that can penetrate more than 1.2 miles (2 kilometers) into the ice in less than two days was used to build the observatory. After the hot water drill bored through the ice sheet, workers lowered optical sensors on cable strings to depths between 4,757 and 8,038 feet (1,450 and 2,450 meters). The ice at these depths is dark and extremely transparent.

Unlike many large-scale science projects, IceCube began recording data before construction was complete. Each year since 2005 following the first deployment season, the new configuration of sensor strings began taking data. Each year as the detector grew, more and better data made its way from the South Pole to data warehouses at the University of Wisconsin and around the world where scientists analyzed them.

"Even in this challenging phase of the project, we published results on the search for dark matter and found intriguing patterns in the arrival directions of cosmic rays. Already, IceCube has extended the measurements of the atmospheric neutrino beam to energies in excess of 100 TeV," said Francis Halzen, the observatory team leader, in a release. "With the completion of IceCube, we are on our way to reaching a level of sensitivity that may allow us to see neutrinos from sources beyond the sun."

The observatory's completion culminates an ambitious and complex multinational scientific project. The National Science Foundation contributed $242 million toward the total project cost of $279 million. The University of Wisconsin-Madison is the lead U.S. institution for the project.