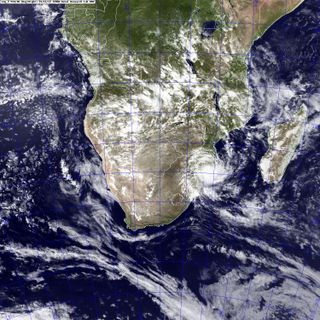 Tropical Depression Dando made landfall over the coast of Mozambique in southern Africa earlier today, as seen in this satellite image.

Dando is the first storm to hit this part of Mozambique since the infamous Tropical Storm Domoina in 1984, according to the UK Met Office. It made landfall at 4:00 a.m. EST (0900 UTC).

Over the next 24 hours, Dando has the potential to drop substantial amounts of rain, with possible local rain totals between 4 to 6 inches (100 to 150 millimeters), according to the RSMC La Reunion-Tropical Cyclone Centre.

Mozambique, a former Portuguese company, is bordered by Tanzania to the north, Zimbabwe to the west, the Indian Ocean to the east, and Swaziland and South Africa to the south.