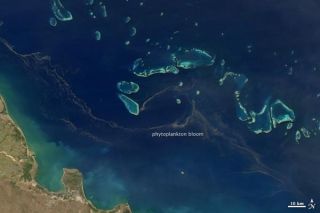 "The Sea in many places is here cover'd with a kind of a brown scum, such as Sailors generally call spawn; upon our first seeing it, it alarm'd us, thinking we were among Shoals, but we found the same depth of Water were it was as in other places."

Sailing through the Coral Sea outside the Great Barrier Reef , Captain James Cook made those observations on Aug. 28, 1770. His journals contain the first mention of the long brown filaments of cyanobacteria that are common along the Australian coast.

On Aug. 9, 2011, the Moderate Resolution Imaging Spectroradiometer (MODIS) on the Aqua satellite captured this view of a similar band of brown between the Great Barrier Reef and the Queensland shore. Though it's impossible to identify the species from satellite imagery, such red-brown streamers are usually trichodesmium. Sailors have long called these brown streamers "sea sawdust."

Trichodesmium, a form of cyanobacteria, are small, usually single-celled organisms that grow in the ocean and produce food through photosynthesis like plants. They play an important role in Earth's oceans because they convert nitrogen gas from the atmosphere to ammonia, a fertilizer that plants can use to grow. At the same time, trichodesmium removes carbon dioxide from the atmosphere. Their blooms often occur in warm, nutrient-poor waters. Charles Darwin observed one such bloom from the HMS Beagle in 1832, marveling that "their numbers must be infinite."