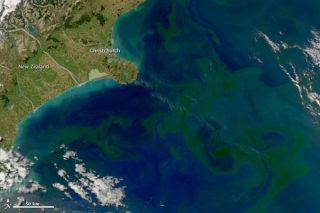 Summer in the Southern Hemisphere, which is coming to a close, brings blooms of tiny ocean plants to the seas around New Zealand.

This image, taken by NASA's Aqua satellite on Feb. 10, shows the swirls of turquoise and green that map out a large phytoplankton bloom along the shores of New Zealand's South Island.

These blooms are of enormous interest to scientists. From a ship on the water, a scientist would be able to sample the bloom to find out just what type of plankton are growing and how the bloom affects the region's biology.

Christchurch, located on the east coast of the South Island, also draws ocean scientists studying the Southern Ocean . It is also a staging ground for flights taking scientists and supplies to stations on Antarctica.

Christchurch was the departure point for NASA Ocean Color staff member, Aimee Neeley, who recently left the city for McMurdo Station, Antarctica. Neeley is currently in the Southern Ocean on the research ship, R/V Nathaniel B. Palmer, according to a NASA statement.

Over the next several weeks, Neeley will be taking measurements that will help scientists interpret ocean color observations, like the above image, from NASA satellite sensors.

Neeley is keeping a blog to share her Antarctic experiences with the community. She will discuss daily life on an oceanographic vessel and describe the scientific questions she is working to answer.