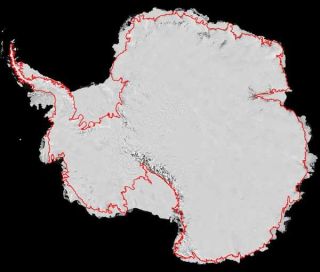 Researchers have connected 3,574,365 points around Antarctica, tracing the most accurate map of the continent's grounding line.
(Image: © NASA.)

The coldest continent, Antarctica, became that way by progressively cooling over the past 37 million years, scientists have found.

Antarctica was once significantly warmer than today. Just prior to 40 million years ago, past studies found, the continent was home to diverse vegetation and experienced average temperatures between 30 and 51 degrees Fahrenheit (minus 1 and 10 degrees Celsius).

It is hotly debated as to why Antarctica then grew colder.

To help solve the mystery, scientists collected seismic data and drilled out tubes of sediment up to more than 100 feet (30 meters) long during two cruises in the northernmost Antarctic Peninsula area. The task wasn't always easy.

"You spend a lot of time lowering drill pipe to the seafloor only to have an iceberg approach and force you to pull pipe and move to another location," said researcher John Anderson, a marine geologist at Rice University. "As you can imagine, this was frustrating, but expected."

The researchers next reconstructed the region's climate and vegetation history by analyzing fossilized spores and pollen, marine organism remains, and sand and pebbles. Materials deposited in sediment are laid down in layers, and therefore can be pinned down to general points in time if these layers were not later disturbed.

They found that 37 million to 34 million years ago, reduced concentrations of atmospheric carbon dioxide coincided with increased mountain glacier formation. From 34 million to 23 million years ago, vegetation primarily consisted of woodlands and tundra dominated by conifers and southern beech. Limited pockets of this tundra were still present until 12.8 million years ago, with this long transition from a temperate alpine region to one of cold and ice continuing until nearly the present day.

"We have long suspected that climate cooling in Antarctica was gradual, based on a large body of evidence from onshore and offshore; however, recent studies have suggested a much more abrupt cooling and associated glaciation due to rapid draw down of carbon dioxide at the end of the Eocene (34 million years ago)," Anderson said. "Our results support cooling at this time, but also indicate that the demise of the Antarctic climate was gradual and that the onset of full glacial conditions and evolution of the Antarctic Peninsula ice sheet occurred over many million years."

The investigators suggest the gradual opening of ocean passageways around Antarctica that isolated the continent helped explain why it progressively cooled. These passageways resulted in currents that flowed around Antarctica, which disrupt ocean currents that would normally transport heat from nearer the equator toward the South Pole, Anderson told OurAmazingPlanet.

This progressive cooling contrasts sharply with the rapid warming trend the Antarctic Peninsula has seen for at least a half-century.

"It is always helpful to place current climate change in the context of natural change," Anderson said. "The fact is the rate of climate change in the Antarctic Peninsula over the past few decades is unprecedented in terms of the rate of change and the geographic extent of change, and this supports other evidence, such as the current unprecedented rate of sea-level rise, that humans are significantly altering Earth's climate."

The scientists detailed their findings June 27 in the journal Proceedings of National Academy of Sciences.