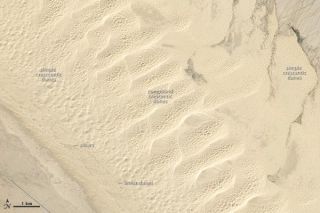 The Algodones Dunes in southeastern California include an array of formations. Four different types of sand dunes are on display.

The rest of the dunes in the image are younger. Most are simple crescentic dunes (the most common type in the world) that get their crescent shape when winds blow consistently in the same direction. These dunes are migrating toward the east-southeast. The western crescentic dunes and the crescentic dune on top of the larger compound dunes are older than the eastern sand fields, which are constantly being reshaped by water flowing from the Cargo Muchacho Mountains in the east and by the plants that grow in the waterways. (The waterways and plants are fine, dark lines in the upper right corner.)

Though the mountains of sand that make up the Algodones field could not seem more different from the irrigated green fields of the Imperial Valley a few miles to the west, the two are closely related. Both are artifacts of Lake Cahuilla, a large freshwater lake that occasionally forms in southern California. The lake fills when the Colorado River Delta clogs with silt, diverting the river to the north into the Imperial Valley. It slowly disappears when the river returns to its former course, leaving a layer of silt that provides rich farmland. The waves on the eastern shore also deposit fine sediment and sand that have formed the dune field.