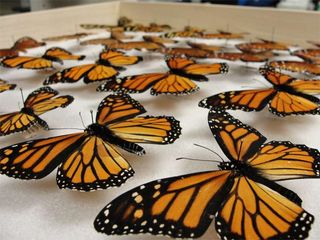 Monarch butterflies that migrate for long distances have evolved significantly bigger and longer wings than their cousins who just stay put, a new study finds.

Such traits are known to enhance flight abilities in other migratory species, which could explain why the far-flying butterflies evolved such a wing design.

Researchers at the University of Georgia examined the size and shape of monarch wings from migratory and non-migratory populations using sophisticated computer imaging that was able to measure precise details about the insects' wings.

They compared migratory monarchs from the eastern and western continental United States to those in Hawaii, Costa Rica, South Florida and Puerto Rico that do not migrate.

They also measured the wings of lab-grown monarchs to rule out environmental causes of differences in size and shape, and to demonstrate a genetic basis for variation in wing traits among individual monarchs.

Their findings suggest that the best shape for long-distance flight involves long wings with a narrow tip to help reduce drag, which agrees with the findings of previous studies comparing migratory and non-migratory birds.

The team also found that monarchs from the two migratory populations in the United States differed in body size, suggesting that each population could have adapted to the demands of migration in subtly different ways. Larger bodies might help eastern monarchs, with their much longer migration, to carry fat deposits to fuel the long journey and five-month overwintering period in Mexico.

Monarchs in eastern North America, famous for migrating the longest distances of any insect species in the world, face a number of threats, to the point that monarch migration is considered to be an "endangered phenomenon."

Doctoral student Andy Davis, part of the team that conducted this study, has done previous research that shows that female monarch butterflies are on a 30-year decline in the eastern United States, which is a bad situation for maintaining the monarch population.

Furthermore, monarchs from this population are prone to periodic population crashes from storms at the Mexican overwintering site.

Although monarchs worldwide are not threatened, those with the larger wingspan are, said study team member Sonia Altizer.

"Our study shows that we would lose an evolutionarily unique population if the migration of eastern monarchs were to unravel," she said.

The team's findings will be detailed in an upcoming issue of the journal Evolution and are currently published online.