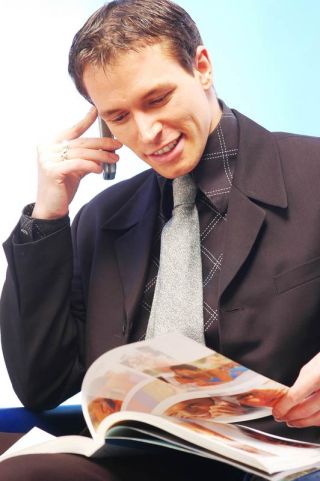 Guys who check out the sexy female models in so-called lad magazines such as Maxim have more body-image problems than their pals, a new study finds.

While it is fairly well-known that women feel worse about their bodies after viewing other females in Cosmopolitan or Glamour, guys apparently take the same knock after perusing the lingerie-clad women spread across the pages of Maxim, FHM and Stuff.

The researchers say that by looking at idealized, sexualized women, guys feel less-than because they start thinking they need to measure up on the attractiveness scale to snag such a mate.

"Men make the inference that in order to be sexual and romantic with women of the similar caliber they see in Maxim magazine, they also need to be attractive," said lead researcher Jennifer Aubrey of the Department of Communications at the University of Missouri, Columbia.

The jury is still out on whether good-looking people snag others of their same physical caliber, however. In fact some research suggests women go for relatively less-attractive guys.

Nevertheless, Aubrey said lad magazines send the message that guys should be having lots of sex.

"So you have that in your head while you're looking at these magazines. If you want to get as much sex as possible with these types of women, then what's left but the feeling you need to look a certain way in order to do that," Aubrey told LiveScience.

Aubrey and her colleagues first looked at how guys reacted to magazines such as Maxim, FHM and Stuff, the pages of which are laden with scantily dressed and stylish gals along with articles written from an uber-male perspective about fashion, sex, technology and pop culture.

The researchers had 77 male university students answer questions about body self-consciousness and anxiety about appearance at the beginning of the study and one year later. They found that reading such magazines was related to more body self-consciousness. Statistics ruled out the possibility that guys who have body-image problems specifically sought out lad magazines.

"This was surprising because if you look at the cover of these magazines, they are mainly images of women," Aubrey said. "We wondered why magazines that were dominated by sexual images of women were having an effect on men's feelings about their own bodies."

In another study, Aubrey and her colleagues asked a group of 100 male undergraduate students to view one of these three types of images: layouts from issues of FHM, Maxim and Stuff showing a woman dressed in either lingerie or a bikini, along with a description of their appearances; layouts about male fashion showing well-dressed, fit guys; or magazine layouts that were "appearance-neutral" and so featured topics such as technology and film trivia.

To try and figure out why men get such a body-image knock from viewing images of beautiful women, the researchers ran a similar study with 143 male undergraduates. This time, the guys were divided into two groups, one viewing magazine spreads of sexually idealized females and the other viewing the same layouts with an average-looking boyfriend added to the photos next to the sexy woman, along with captions about how the female models are attracted to the average-looking men.

Men who looked at sexualized women reported being less likely to ask a woman out on a date or to interact with her. These men who were less romantically confident also were more self-conscious about their bodies.

Men who saw the average Joe pictures did report less body self-consciousness than men who saw images of just the sexy woman, but the finding wasn't statistically significant.

The research is detailed in the current issue of the journal Human Communication Research.