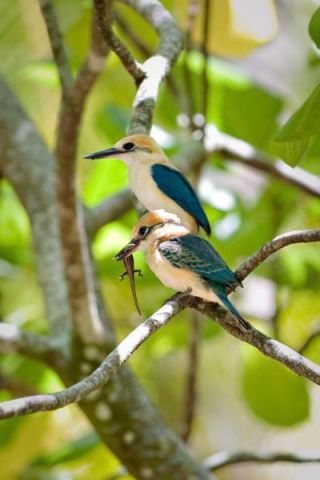 The Tuamotu Kingfisher is a multicolored, tropical bird with bright blue feathers, a dusty orange head, and a bright green back.

The entire population of these birds less than 125 lives on one tiny island in the South Pacific, and without serious intervention, they will no longer exist, scientists say.

One researcher is trying to stop the birds' extinction by working with farmers and residents on the island inhabited by the kingfishers.

"If we lose these birds, we lose 50,000 years of uniqueness and evolution," said Dylan Kesler, assistant professor in fisheries and wildlife at the University of Missouri's School of Natural Resources in the College of Agriculture, Food and Natural Resources. "Because it has lived in isolation for a very long time, it's unlike any other bird. There is no other bird like this on the planet."

Kesler and his colleagues have found a unique way to attach radio transmitters to the birds to track them and have discovered things about the birds, and ways that farmers can help, that could improve the birds' chances of survival.