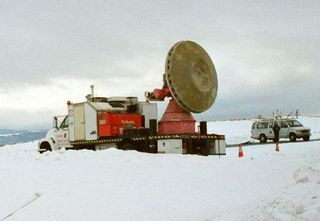 A Doppler-on-Wheels (DOW) stands tall against the elements.
(Image: © CSWR)

While most of us will be hiding indoors during the upcoming snowstorms, a truck-mounted radar dish will be standing out in the cold getting a good look at the inside of the storm.

This month and next, scientists inside what are called Doppler-on-Wheels (DOWs) will be tracking snowstorms in and around Oswego in upstate New York. Researchers hope to learn what drives lake-effect snowstorms , which form parallel to the long axis of the Great Lakes and produce enormous snowfall rates.

These long lake-axis-parallel (LLAP) bands of snow are more intense than those of other snow squalls and produce some of the highest snowfall rates and amounts in the world.

The DOWs measure Doppler winds, snow intensity and whether the falling snow is dense and comprised of pellets or formed from loose collections of traditional six-sided snowflakes. This information plays a major role in whether lake-effect snow bands will drop a few inches of snow or a few feet.

"The mobility of a DOW is ideal for following lake-effect storms," said Scott Steiger of the State University of New York (SUNY)-Oswego. The DOW will allow us to witness them as they form and cross lakes, which other weather radars can't do."

Each DOW is mounted on the back of a flatbed truck, which then acts as a combination of generator, equipment and operator cabin. It uses Doppler radar to produce velocity data about severe storms at a distance, and collects data from within the storm as well as aspects of the storm that cannot be recorded with more distant radars.

"Ungainly as it may appear, it's ideally suited to provide detailed information on the inner workings of snow and other storms," said Josh Wurman, director of the Center for Severe Weather Research (CSWR) in Boulder, Colo.

The DOW radars have dual polarization to take storm measurements. This means that the radars send out waves of both horizontally and vertically oriented energy. Scientists can learn more about the snowflakes, ice, rain and ice pellets in these snowbands by studying the differences in the energy bounced back from these horizontal and vertical beams.

The DOWs collect data that will be used to determine how LLAP snowbands intensify, weaken and move across a region.

"Instead of waiting for snowbands to come to us," Wurman said, "we and the DOWs are going to them."

During the past week, scientists deployed the DOW to four locations near Oswego and Rochester, N.Y., to study intense snowbands. The bands dropped snow at up to 4 inches (10 centimeters) per hour, with final totals of more than 2 feet (0.6 meters).

More lake effect snows are forecast for this weekend. DOWs and scientists will both be heading to New York's hilltops to see what they can learn.