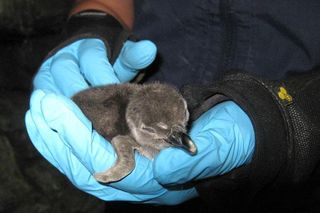 The chick, whose gender has yet to be determined, hatched to first-time parents Umngane (UM-GAHNEE) and Dassen in the aquarium's penguin exhibit.

Blackfooted penguins (Spheniscus demersus) are the only penguin species to breed on the African continent. They live in cold currents along the coast of South Africa. Only some 120,000 of them are in the wild today, according to the Encyclopedia of Earth.

Adult blackfooted penguins stand about 28 inches (70 centimeters) tall. When they're on the move, they can cover about 19 miles (30 kilometers) in a single trip. Underwater, they have been recorded swimming at speeds of 4.6 mph (7.4 kph).

Because of Umngane and Dassen's genetic importance to the captive population, the aquarium received permission from the Association of Zoos and Aquariums to breed them.

During a quick exam Jan. 10, the chick weighed about 4.2 ounces (120 grams), nearly double its weight two days earlier. "That weight gain means the first-time parents are feeding it regularly," said Aimee Greenebaum, associate curator of aviculture at the aquarium. "They're being very attentive."

Greenebaum and others at the aquarium are still being cautious, knowing blackfooted penguin chicks have a high rate of mortality, especially those hatched to first-time parents.

The chick is to remain in its nest for three weeks or until it starts wandering out on its own. Then the staff will move it behind the scenes, where it will be hand-raised and will learn to become comfortable around people.

When the penguin is about 80 days old, it will be placed in the penguin exhibit. It will be introduced to the exhibit slowly and will remain under watchful observation. It will be removed at night until the staff feels confident it can swim, get in and out of the water, and not be harassed by other birds.

The chick is being raised as an "education bird," meaning it is likely to interact with the public as part of educational programs at the aquarium or, if it is transferred, another institution.

For now, people can check the aquarium's website, www.seanotesblog.org, to keep up with the chick's progress.