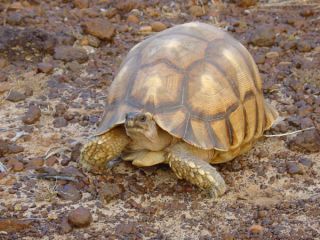 Four 15-year-old ploughshare tortoises that were part of a wildlife haven in Madagascar have been found and returned a year after being stolen.

The four tortoises were taken from the Durrell Wildlife Conservation Trust in Madagascar in May 2009. The tortoises were about to be released back into their native habitat in the northwest of the country after having been part of Durrell's long-term captive breeding program for the species.

Restricted to the bamboo scrub dry deciduous forest of northwest Madagascar, the entire known range of the ploughshare is within the Baly Bay National Park. Previously, the main threat to the tortoise came from habitat loss and degradation from cattle encroachment and burning. Now, however, the leading cause of their decline is illegal harvesting for the international pet trade. As one of the rarest tortoises in the world, the species can command high prices on the black market.

Which is what keepers at Durrell feared would be the fate of their tortoises. An investigation was launched after the tortoises were stolen to make sure the animals did not disappear into the pet trade.

Last year, one of the ploughshares was seized in a shipment of smuggled tortoises about to leave the Antananarivo airport in Madagascar. A short while later another tortoise appeared on a Malaysian website being offered for $15,000; both were ploughshares from Durrell.

In July 2010, two women travelling from Madagascar to Kuala Lumpur, Malaysia, were detained and found to be possessing suitcases containing frogs, 400 radiated tortoises and four ploughshare tortoises. One of the tortoises was positively identified as the third of Durrell's missing animals.

The last tortoises may have been found on Oct. 11, when two suitcases were seized at Bangkok's Suvarnabhumi Airport in Thailand. On opening the suitcases, police found 217 radiated tortoises and one medium-sized ploughshare. Durrell is currently working to confirm whether this tortoise is the last of the four.

The other three tortoises have been returned to Durrell's captive breeding program and are currently under strict police protection.

"This is a really important event. It is a powerful signal from the Malaysian government that they will not stand for the illegal shipment of threatened species through their borders," said Richard Lewis, director of Durrell's Madagascar program. "Most of the illegal trade in wildlife from Madagascar is routed through Southeast Asian countries and we hope that this is a precedent that can be followed by other countries such as Thailand and Indonesia to show that there is no future to illegally stripping Madagascar of its natural heritage for profit."