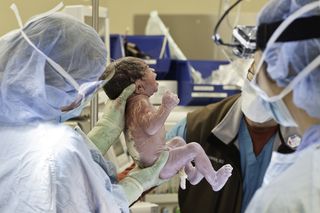 With a gentle pull and a "Hi, cutie!" a doctor pulls a baby from an incision in the mother's abdomen. Within seconds, the newborn has launched into a squalling cry. It's a boy!

Yes, Twitter. This bouncing baby boy made his Internet debut as the star of the first-ever live-tweeted Cesarean section on Feb. 20. Though live webcasts and other social media surrounding surgery are not new, Memorial Hermann Hospital in Houston elevated the art form by choosing a feel-good procedure — the birth of a baby — to broadcast. More than 87,500 people have viewed the video online since it was posted.

Live-streamed and live-tweeted surgeries have become increasingly common in the age of social media, with doctors touting their educational benefits and hospitals enjoying the public-relations bump. Plenty of patients are happy to go under the knife on camera, too, including one optometrist who will get an implantable contact lens live online at 9 p.m. EDT on May 1. But online surgical broadcasts aren't without controversy: At least one major surgeons group is discouraging them outright. [Social Surgery: A Gallery of Live-Tweeted Operations]

Public viewings of surgery are an old trend made new again. In ancient Greece and in Europe up until the 20th century, surgical procedures weren't considered a private affair. Surgeons often plied their trade in public, with family members and neighbors crowded around the patient. (It helped that the only viable surgeries were minor, and that in the Middle Ages, many surgeons doubled as barbers.)

The discovery of anesthetics in the mid-1800s made longer, more complex surgeries possible. This discovery, combined with the realization that germs cause infection in surgical wounds, made surgery a more formal, professional affair.

Today, prospective patients and surgery aficionados can turn to the Internet for similar peeks inside the operating room. Hospitals have been live-webcasting surgeries on adults for years; by 2005, Boston Children's Hospital felt comfortable enough with the idea to become the first pediatric hospital to broadcast a live surgery. The hospital has since shown major pediatric surgeries, including a heart-defect correction in an 8-month-old and a brain-tumor removal in a 13-year-old.

Many of these webcasts are available to the public, but they have been geared largely toward other physicians through subscription-based online broadcasting services, such as ORLive.

Doctors who participate in these live webcasts see themselves in an educational role.

"The goal was really to unveil a very common surgery for women and to demystify it and show the step-by-step process of what actually goes on in a C-section," said Anne Gonzalez, an obstetrician-gynecologist at Memorial Hermann who performed the live-tweeted C-section.

"The things you see on TV are often edited to a significant degree," Gonzalez told LiveScience. "This was going to walk a patient through, starting from the minute they walked into the hospital."

Robert Rivera, an ophthalmic surgeon at Hoopes Vision in Salt Lake City who will perform a live-streamed contact-lens implant on Wednesday (May 1), said he's drawn to the interactive aspect of online surgery.

"Why not take this onto the Internet and allow patients from literally everywhere to watch a real-time procedure, to ask questions and to basically have an unprecedented opportunity to see the thing for themselves?" Rivera said.

The implantable-contact-lens surgery and the Cesarean section are both common and relatively simple procedures. Knowing she'd be videotaped "put a slightly different spin on the nerves," Gonzalez said, but surgeons are used to pressure.

"As with any type of surgery, once you get into it, you're just focused on the surgery," she said.

Gonzalez and her surgical team had contingency plans, in case something were to go wrong during the C-section. Live video would have stopped, she said, though the public still would have received updates on the conditions of the mother and baby. Memorial Hermann also has live-tweeted brain surgery and open-heart surgery.

"Thankfully enough, I don't get nervous during these types of things," Rivera told LiveScience. But if something were to go amiss, the audience would be along for the ride.

"We deal with these things real-time," he said.

Something going wrong is a primary concern for doctors, who, by all ethical standards, must put their patients first. The Society of Thoracic Surgeons goes so far as to frown upon live broadcasts of surgery even for the benefit of other physicians, unless the educational value is high. Twitter broadcasting is strongly condemned by the group.

"Surgeons should not participate in live surgery broadcasts to the public or lay audiences using any medium, including television and the Internet," according to the society's guidelines.

Some patients question the practice, too. Elaine Schattner, a journalist and physician who has undergone multiple major surgeries herself, questions putting hospital resources into live-tweeting.

"The way I see it, most hospitals are short-staffed, so to have a person who is the designated tweeter paid for by the hospital is absurd," Schattner told LiveScience.

Schattner also expressed concern about potential distractions to the surgeon and whether social media surgeries serve a purpose beyond public relations and marketing for a practice or hospital. There's no extra benefit to live surgery compared with watching prerecorded videos on YouTube or elsewhere, she said.

Despite some criticism, social-media-broadcasted surgery appears unlikely to fade from the Internet as patients demand more inside access to procedures.

"With how informed patients are these days, I think it's going to be something that becomes more common," Gonzalez said.