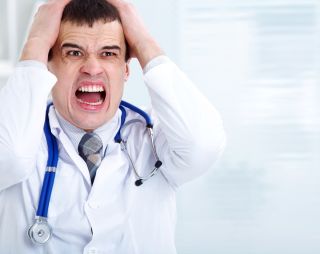 The analysis, published Dec. 19 in the journal Surgery, used malpractice records to find instances in which surgeons operated on the wrong patient or part of the body, or left objects inside the patient after surgery.

Compared to other medical errors, the rate of such of such mistakes in the United States is very low. Still, the study found doctors leave towels, cotton balls, sponges and other surgical equipment inside patients' bodies about 39 times a week, on average. Doctors operate on the wrong body part 20 times a week and the wrong patient, also 20 times a week.

(Those numbers were extrapolated to the whole U.S. population based on statistics found in the malpractice sample.)

The study's findings likely underestimate the actual occurrence, however. "What we describe in a study is the low end of the range. There are definitely more of these occurring," said study co-author Dr. Marty Makary, a surgeon at Johns Hopkins Medical Center and the author of a book about hospital dysfunction called "Unaccountable" (Bloomsbury Press, 2012).

Other studies have shown doctors are likelier to leave sponges or other objects behind when a patient is obese and there are multiple care-teams operating on the same patient, Makary said. Avoidable mistakes also happen when doctors are rushed or harried, or when the hospital has a culture in which nurses don't feel comfortable speaking up when something looks fishy, he said. [7 Medical Myths Even Doctors Believe]

While some surgical errors may be unavoidable, the types of mistakes accounted for in this study should never happen, Makary said. These occur not because doctors are negligent, but because hospitals don't have good systems in place to prevent accidents, he told LiveScience.

Makary's team picked out 9,744 malpractice lawsuits in which hospitals paid patients or their families for one of those rare mistakes. (Because it is so easy to use X-rays or CT scans to detect left-behind objects, hospitals rarely pay out for such claims if they are faked, Makary said.)

The research team concluded that more than 80,000 major surgical errors happened between 1990 and 2010. About 7 percent of those unlucky patients died, while a third of them suffered permanent injury as a result of the mistake.

One solution is to tag all instruments and surgical equipment with radio frequency ID (RFID) tracking chips. If something gets left behind, surgeons could tell instantly by simply scanning the patient, he said. Forcing hospitals to publicly report all of these errors, not just the ones that end in a lawsuit, would also help improve patient safety, he said.

But the most important thing is to build safety into the systems, ensuring the whole surgical team works together to protect patients, Makary said. That means making sure nurses feel comfortable standing up to doctors when mistakes are imminent, he said.

"I'm a surgeon, and I'm human and am capable of these mistakes," Makary said, describing the environment that hospitals should foster. "I almost began an operation on the wrong patient. A nurse who felt empowered spoke up when she felt that something didn't look right."