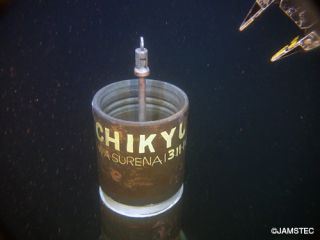 Scientists are cheering a successful finish to their race to the bottom of the deep ocean after the devastating 2011 Japan earthquake. On April 26, researchers retrieved temperatures sensors installed across the earthquake zone in 2011. The sensor data will provide information on frictional heating created as two massive tectonic plates offshore of Japan suddenly released their grip and slid, and help scientists infer the forces on the plates before the quake, according to a statement.

Following the massive magnitude-9.0 Tohoku earthquake on March 11, 2011, an international team scrambled to install temperature sensors across the tectonic plate boundary where the quake struck. Researchers also collected geological samples to analyze the physical properties of the fault zone. Early results have already showed the earthquake released a tremendous amount of energy, relieving all the built up stress along the boundary. The Tohoku earthquake expedition marked the first time a research ship had drilled in such deep water — more than 22,000 feet deep, or nearly 7,000 meters of ocean, the statement said.