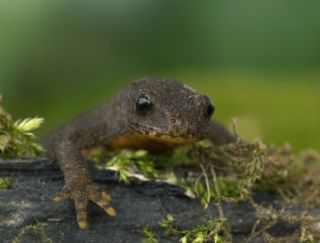 With their long tails and slender bodies, newts are often confused for lizards. But these amphibians, which can be found on all continents except Australia and Antarctica, are very different from their reptilian doppelgangers, particularly when it comes to mating.

Unlike lizards, newts breed in water and males don't have penises to impregnate females internally. Instead, male and female newts have an orifice called a cloaca, which leads to the intestinal, reproductive and urinary tracts. For insemination, males will deposit a sperm packet (called a spermatophore) onto a substrate in the water, such as a leaf, and then lead the female over it so she can pick it up with her cloaca. Just how the newts get to this point, however, varies between species.

Some species, such as the California newt (Taricha torosa) and the rough-skinned newt (Taricha granulosa), conduct a mating dance that seems similar to the behavior seen in penis-wielding animals. That is, males will mount their mates. The male starts by capturing the female with his front legs, climbing onto her back and holding tight with his four limbs. He'll then rub his chin on her nose and flutter his tail to get his mate in the mood. After about an hour, he'll dismount and deposit his spermatophore. [The Weirdest Animal Penises]

Other species, including the alpine newt (Ichthyosaura alpestris)and the smooth newt (Triturus vulgaris), let their pheromones do all the talking. After a male wafts his pheromones toward a female, she will chase after him as if playing tag. She'll then nudge his tail with her nose to let him know she's ready for his spermatophore.

Importantly, the male's appearance means little to the female in the face of his overpowering smell. In fact, recent research showed that the male alpine newt's pheromones are so potent they make females want to mate with any adult newt around, including females from other species.