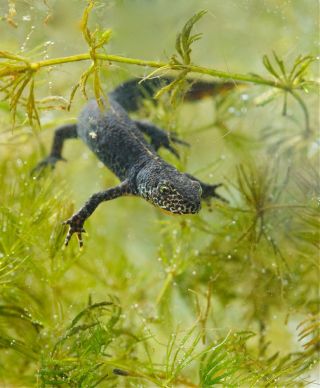 It may be time to crown male newts as the female-arousing kings — the amphibians release powerful pheromones that put females in the mood to mate with practically any adult around, even other females from different newt species, new research shows.

"The females react as if they're under the influence of drugs," said lead researcher Franky Bossuyt, a biologist at Vrije Universiteit Brussel (Free University of Brussels) in Belgium. "We were convinced that if we put in a plastic toy moving at the right speed, they would follow it."

Newts typically live on land as adults and mate exclusively in water. During the breeding season, males adopt intense color patterns and grow skin extensions on their legs, tail and crest. These changes are thought to make males more attractive to females.

When two newts meet, the male releases pheromones and waves his tail, sending the chemical signals to the female. They then play out a mating dance akin to a short game of tag, with the female following after the male. To let him know she's ready to get down to business, the female touches the male's tail with her nose, prompting him to deposit his spermatophore — a jellylike mass containing sperm— onto a substrate in the water, such as a leaf. Finally, he leads the female over the sperm packet, which sticks to her cloaca (the orifice leading to intestinal, reproductive and urinary tracts), resulting in insemination.

For years, scientists thought males waved their tails to disperse "attractant pheromones," which broadcast the male's presence and bring newt pairs together. But there's a problem with this idea: The newts have already introduced themselves before the male waves his tail. "The females are not attracted to the males by the tail-waving, at least with the newts I've seen," Bossuyt said.

Instead, the researchers thought, the tail fanning might disperse "courtship pheromones" that alter the female's behavior to stimulate mating.

To find out, researchers placed male-female pairs of alpine newts (Ichthyosaura alpestris) and palmate newts (Lissotriton helveticus) into water-filled plastic containers for receptivity tests. The newts passed the test and were ready for the next phase if they completed the courtship ritual (females weren't allowed to complete the insemination).

The team then put two-female pairs into pheromone-infused courtship water; some pairs consisted of two alpine newts, other pairs had one female of each species. If the water contained pheromones from a male of her species, the female would desperately try to court the other female. In some cases, two female alpine newts tried to follow each other, resulting in the pair circling one another. In some two-species trials, one female chased after another, even as the unreceptive partner tried to escape the container. [See video of the sex-crazed newts]

But the amphibians didn't remain patient forever. Not receiving the spermatophore she expected, the courting female eventually started waving her tail at her partner, possibly sending out pheromones.

"Female tale-waving is a kind of frustration behavior," Bossuyt explained, adding that females also tail-waved in receptivity tests to get males to continue courtship after researchers removed the spermatophores. In natural settings, this behavior probably happens only in uncommon situations, such as when a male is too tired for courtship. "So female tail-waving likely happens in nature, but you will not easily observe it," he said.

The results suggest the pheromones don't just announce the male's arrival, given how they induced such an overpowering mating reaction in the females. The researchers think males may have evolved such potent pheromones out of necessity, since newts often breed in turbid water with other newt species, making it difficult to mate based on vision alone.

It seems a male newt's flashy appearance matters little to females: It's all about his smell.

The research was detailed online this month in the journal PLOS ONE.