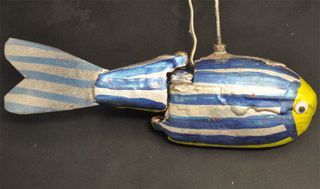 A robotic fish waving its tail in a certain way was able to lure in real fish, scientists report in the Nov. 14, 2012, issue of Journal of the Royal Society Interface.
(Image: © Maurizio Porfiri )

Robotic fish can make real fish like them simply by waving their artificial tails in a special way, researchers say.

These droids could lead real fish away from perils such as underwater turbines, and help scientists learn more about how real animals behave, investigators added.

Roboticists have long turned to nature for inspiration when designing robots. For instance, a robot that copies roaches' ability to quickly disappear under ledges could lead to droids with animal-like maneuverability, while another robot can alter its colors to hide or stand out in its environment just like an octopus.

Robot fish convincing enough to lead groups of real fish around are being developed by mechanical engineer Maurizio Porfiri at the Polytechnic Institute of New York University and his colleagues.

"In the long run, we'd like to use robots to influence the behavior of fish — to steer them away from pollution or oil spills or dangers in general," Porfiri said.

The researchers experimented with zebrafish, a popular home aquarium fish and common lab animal named for its stripes. They created a robotic fish about 6 inches (15 centimeters) long that was shaped and painted to look as much as possible as a real zebrafish. [See Video of Robo-Fish Wagging Its Tail]

A computer tracked the positions of real fish near the robot and remotely controlled the droid's motions. The scientists programmed the computer to change how the robot moved its tail as real fish swam toward or away from it.

The researchers found that when the robot beat its tail faster as zebrafish approached and slower as they moved away, the real fish preferred spending more time near it. Similar experiments in carp have shown that whenthose fish are trying to convince their fellows that they know where food is, they also beat their tails when their companions get closer, Porfiri explained.

By seeing how robots can best influence animals, the researchers hope to learn what makes them follow leaders and create droids that can lead them around. Not only could such robots help lead real fish from danger, but scientists could also use them to learn more about animal behavior — for instance, whether certain fish movements really are a way of communicating with others.

The researchers would also like to include distractions in their experiments, to see if real fish still follow the cues that robots give off if other things are grabbing their attention.

Porfiri and his colleagues detailed their findings online in tomorrow's (Nov. 14) Journal of the Royal Society Interface.