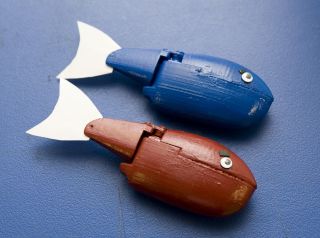 Scientists have long turned to nature for inspiration and innovation. From unlocking the secrets of spider silk to create super-strong materials to taking hints from geckos for new adhesives, clues from the natural world often lead to advances in our practical world. But the relationship between engineering and nature has been largely one-directional, with humans reaping the majority of the benefits of discovery.

What if it was possible to close the loop, and combine human ingenuity and nature’s wisdom to protect a species or ecosystem?

Dr. Maurizio Porfiri, Assistant Professor of Mechanical Engineering at the Polytechnic Institute of New York University, is one step closer to that goal through his research into the behavior of schooling fish, which is funded by a prestigious NSF Faculty Early Career Development (CAREER) award. Porfiri’s findings led him to create a series of biologically inspired robots that may help preserve and protect marine life.

"Studies of schools of fish, flocks of birds and herds of animals have inspired robotic systems designed for our own applications," said Porfiri. "But I wanted to see if I could close the gap, bringing some of those benefits back into the natural world."

A lifelong animal lover who recalls childhood aspirations of becoming a zookeeper, Porfiri began his studies of fish schooling by examining how leadership is established within these populations. "Schooling fish have a rich system of information sharing," explains Porfiri. "They decide when to school based on a wide variety of factors, including vision and pressure cues from other fish. By studying these cues, we can learn how school members recognize—and follow—a leader."

Porfiri posited that if he could enforce leadership by an external member—in this case, a robot that actively engages the group—he could influence the direction and behavior of schooling fish. This could prove a life-saving advantage for marine populations in the event of oil or chemical spills or other natural disasters. Porfiri also envisions the ability to lead fish away from man-made dangers like turbines.

Porfiri’s background in dynamical systems, mechanics of advanced materials and underwater robotics aided in the creation of robotic "leader" fish that while not especially lifelike at first glance, are deceptively agile swimmers. When deployed in an environment with groups of gregarious fish, these robotic members have been effective at influencing the school’s behavior. Porfiri suggests that one of the secrets to the robots’ ability to successfully school with real fish may lie in their mimicry of the swim characteristics of real fish.

This first generation of robotic fish is capable of swimming along a plane, and future generations will be able to dive and surface. In laboratory observations, Porfiri and his team have noted a variety of interaction patterns between groups of gregarious fish and the underwater robot, including tracking, milling and following, hinting that the group’s behavior can be altered by a robotic member.

In the meantime, the NSF CAREER grant, which also supports community outreach, gives Porfiri the opportunity to take his work beyond the lab to recapture the old dream of spending his days at the zoo. Throughout the academic year, he and his students can be found at the New York Aquarium, where they nurture a passion for math, science and engineering among local elementary and middle school students. The young students engage in authentic robot design experiments, creating custom caudal fins for robotic fish. By deploying robots equipped with these fins during test swims, the classes learn how fin size and shape affect swimming performance.