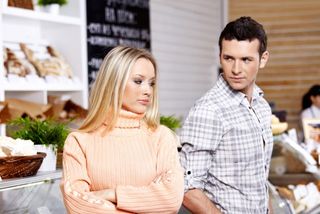 It's a cliché that men just don't understand women.

The research, published Wednesday (April 10) in the journal PLOS ONE, showed that men had twice as much trouble deciphering women's emotions from images of their eyes compared with those of men. Parts of the male brain tied to emotion also didn't activate as strongly when the men looked at women's eyes.

While pop culture claims that men are from Mars and women are from Venus, both sexes are pretty similar. Yet despite the genders' psychological overlap, a few small studies in men have suggested they have trouble "mind-reading" and guessing what women are thinking and feeling. For instance, one study found that men interpret friendliness from women as sexual come-ons. [Busted! 6 Gender Myths in the Bedroom & Beyond]

Research also shows that women prize men who try to understand them.

To see whether men really did have trouble reading women's emotions, Boris Schiffer, a researcher at the LWL-University Hospital in Bochum, Germany and his colleagues put 22 men between the ages of 21 and 52, with an average age of 36, in a functional magnetic resonance imaging scanner, which uses blood flow as a measure of  to measure their brain activity.

They then asked the men to look at images of 36 pairs of eyes, half from men and half from women, and guess the emotion the people felt. The men then chose which of two words, such as distrustful or terrified, best described the eyes' emotion. The eye photographs depicted positive, neutral, and negative emotions.

The findings suggest that men are worse at reading women's emotions. This "theory of mind" is one of the foundations for empathy, so the deficit could lead men to have less empathy for women relative to men, the researchers write.

But exactly why this happens isn't clear. While men could be culturally conditioned to pay less attention to women's emotional cues, another possibility is that their differential response is hard-wired by humans' evolutionary past.

"As men were more involved in hunting and territory fights, it would have been important for them to be able to predict and foresee the intentions and actions of their male rivals," the researchers write in the paper.