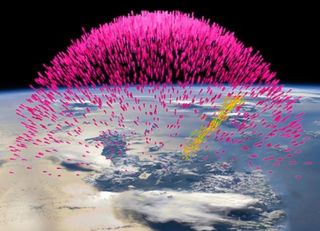 Artist impression of a terrestrial gamma-ray flash, called "dark lightning," originating from a thunderstorm. The gamma rays (pink), in turn, generate electrons and positrons (yellow and green), their antimatter counterparts, which get blasted into space.
(Image: © NASA)

More Earth-gazing satellites are needed to better understand the phenomenon of so-called dark lightning, according to researchers speaking at a meeting of the European Geosciences Union today (April 10) in Vienna.

Dark lightning is invisible to the naked eye, but in certain, extremely rare conditions could produce gamma-ray radiation in an airplane equivalent to a few chest X-rays or a full-body CT scan, the researchers said, though they emphasized that the phenomenon does not appear to be dangerous to flyers.

"It's really a brand-new thing to realize this could happen deep in our atmosphere with something as ordinary as a thunderstorm," said Joseph Dwyer, a physicist at the Florida Institute of Technology, during a webcast news conference.

The satellites currently studying this phenomenon are not designed to look at Earth; instead, the satellites probe black holes and other phenomena far away in the universe that produce gamma-rays, and happen to sense radiation from Earth that is coming from behind them.

This led scientists to say that the field of research could use a dedicated Earth-gazing satellite.

"It's an important issue, and we have to study it more," said Marco Tavani, an astrophysics researcher at the University of Rome and Italy's National Institute for Astrophysics.

Gamma-rays within the atmosphere

"Dark" lightning is a type of electrical discharge within a thunderstorm that produces what are called terrestrial gamma-ray flashes. Gamma-rays are at one extreme end of the electromagnetic spectrum of light and are higher energy than ultraviolet light or X-rays. The phenomenon of dark lightning takes place in regions of the atmosphere with strong electric fields. [Infographic: Earth's Atmosphere Top to Bottom]

When these terrestrial gamma-ray flashes were first seen in the 1990s, Dwyer explained, it was thought they came from the upper parts of the atmosphere in a region that is well away from where people are. Eight years ago, however, a research team found gamma-rays originating from well within the lower part of the atmosphere during a thunderstorm, leading to questions about how airplane flyers would be affected.

Tavani said Earth-gazing satellites should feed into an early warning system that weather forecasters and airline officials would have access to, just as a precaution.

The concern is how gamma-rays can produce neutrons, which would increase the background level of these particles that humans are exposed to when flying.

Gamma-rays of large enough energy, Tavani explained, "excite" the nuclei in oxygen or nitrogen in the atmosphere, as well as the aluminum that makes up planes. The nuclei then decay, which can lead to brief periods where the number of neutrons in the vicinity increases.

"Neutrons are pretty nasty," Tavani said. (Neutron radiation is a harmful side effect of nuclear reactions, for example.)

He added, however, that flyers are already exposed to 300 times more neutrons per second in the air than they are on the ground. The aviation industry is aware of this normal background, but the bursts of neutrons produced in thunderstorms are not as well understood, Tavani said.

Gamma-rays on Earth are currently being studied by Italy's AGILE satellite, which is designed to hunt X-rays and gamma-rays in the universe, and NASA's Fermi Gamma-ray Space Telescope. A modest Earth-gazing detector is on the way to orbit soon, however.

The Atmosphere-Space Interactions Monitor (ASIM) instrument is expected to launch to the International Space Station aboard a robotic HTV cargo ship in 2013 or 2014.

The European instrument, which includes a suite of cameras and a gamma-ray detector, will study "extreme thunderstorms" as well as the Earth's clouds, atmosphere and water cycle.