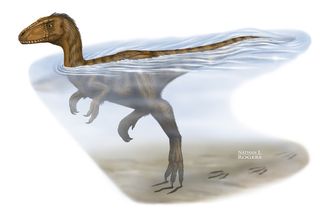 Claw marks on a 100-million-year-old riverbed in China reveal how some dinosaurs doggy-paddled over long distances, scientists say.

"What we have are scratches left by the tips of a two-legged dinosaur's feet," study researcher Scott Persons, of the University of Alberta, said in a statement. "The dinosaur's claw marks show it was swimming along in this river and just its tippy toes were touching bottom."

Stretching over a distance of 50 feet (15 meters), the markings show that the dinosaur had a coordinated, left-right, left-right swimming style, Persons said. The researchers believe the scratches belong to a carnivorous theropod — a type of dinosaur that walked on two legs — that stood roughly 3 feet (1 meter) at the hip.

While it's tough to determine the identity of the swimming dinosaur from these marks alone, Persons suspects it could have been an early tyrannosaur or a Sinocalliopteryx, predators known to have roamed this prehistoric landscape in China.

The paddle-scratches were found in a dried-up river in China's Szechuan Province, which Persons described as a "dinosaur super-highway," full of the footprints of other Cretaceous-era theropods and long-necked, four-legged sauropods.

The research was detailed April 8 in journal Chinese Science Bulletin.

It's not the first time dinosaur paddle prints have turned up in the fossil record. In 2007, paleontologists found S-shaped prints on the bottom of what was a lake in the Cameros Basin in Spain 125 million years ago. The unusual tracks indicate the animal's body was floating in about 10 feet (3.2 m) of water when it scratched the lakebed, researchers said at the time.

Earlier this year, a group of scientists published a study in the Journal of Vertebrate Paleontology arguing that a set of up to 4,000 fossilized footprints in Australia is evidence of a dinosaur river crossing — not a stampede over land, as was long thought.