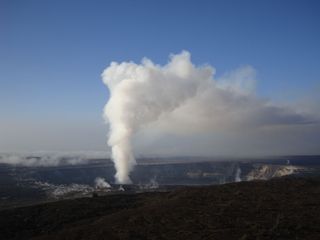 Volcanic gasses and ash emanate from the summit eruptive vent as a vast plume, and from surrounding fumaroles at Kilauea Volcano on 28 May 2009. The vent, which formed in March 2008, broke a 26-year-long period of no eruptive activity at Kilauea's summit.
(Image: © USGS photographs by J. Kauahikaua)

It's rarely good news when a volcano has indigestion. Volcanic gas "burping" from a fiery peak signals magma moving down below — a warning sign of a possible eruption.

If scientists can reach hazardous volcanoes — such as at Hawaii's Kilauea volcano — on foot or by helicopter, they collect samples to track the volcanoes’ gas emissions. Now, a new study of Kilauea's 2008 summit eruption reveals simple earthquake monitors can perform a similar task. The results appear in today's (April 9) issue of the journal Nature Communications.

"This is another tool to forecast eruptions, particularly on remote islands, where gas monitoring is not possible," said Jessica Johnson, lead author of the study and a geophysicist at the U.S. Geological Survey's (USGS) Hawaii Volcano Observatory.

Johnson and USGS colleague Michael Poland tested the idea at Kilauea's Halema'uma'u crater. On March 19, 2008, gas and lava punched through the crater wall, birthing a new lava lake. Before the eruption, sulfur-dioxide gas levels jumped, and so did the number of earthquakes. Thanks to these clues, scientists knew magma was churning, but the actual eruption's exact timing was still a surprise.

Johnson went back to the 2008 records from Kilauea's seismometers, instruments that record earthquakes, and examined how the seismic waves traveled through different underground rock layers. Earthquake waves can split — similar to the way light passes through polarized sunglasses — and they'll travel faster along layers than across layers, Johnson explained. Cracks in the rock layers can also change this "polarization" as the voids open and close in response to changing forces, such as Kilauea's growing and ebbing magma chambers. [Amazing Images from Kilauea's Lava Lake]

Before the 2008 Kilauea eruption, an increasing amount of gas forced its way through fissures and cracks in the volcano's summit lava flows, and the changing stress affected how earthquake waves traveled through the rock layers, Johnson discovered.  Johnson looked at the changes in the earthquake waves, a technique called earthquake "shear wave splitting," and was able to link them to the rising gas levels, something that has never before been done at Kilauea.

Johnson also has tested the technique at New Zealand's Rotorua and Tongariro volcanoes, where she saw hints of Tongariro's imminent 2012 eruption. Had the earthquake-gas monitoring been used before Kilauea's 2008 eruption, it wouldn't have tipped the scales toward predicting the eruption, especially since Kilauea is already so heavily monitored, Johnson said. But the setup could come in handy at remote volcanoes, such as those on Alaska's Aleutian Islands, where regular gas monitoring is impracticable or impossible.

With four seismometers (at least one must measure in three directions: up-down, east-west and north-south), scientists could detect rising gas levels, Johnson said. Such setups are already in place at many active volcanoes worldwide, she added.

"At a volcano where you don't have gas measurements, this would give you enormous additional information," Johnson told OurAmazingPlanet.