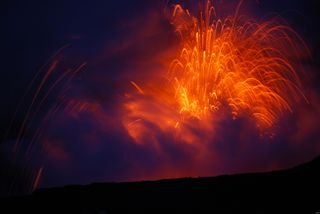 Lava from the Pu'u O'o crater eruption of Hawaii's Kilauea volcano, active since 1983, meets the ocean and large littoral explosions from steam result. This photo was taken on July 16, 2008.
(Image: © M. Poland, USGS)

A fiery cone, called Pu'u 'O'o, soon rose out of the charred rain forest. Towering lava fountains shot 1,500 feet (460 meters) into the air, voicing a roar heard for miles. Pu'u 'O'o's first three and a half years of eruption were fitful, until new cracks ruptured from the base cone in 1986, marking the switch to a nearly continuous eruption.

The 30-year-long outpouring at the east rift zone is the longest-lasting eruption on one of Kilauea's two rift zones since the 15th century. The constant belching added 500 acres of land and could have filled 1.5 million swimming pools, but also destroyed 214 homes.

Under the watchful eyes of the world's scientists and millions of tourists — and now ceaselessly tracked live online — the constant activity greatly improved knowledge of how volcanoes work.

"It's become the landmark of open-vent volcanoes," said Jim Kauahikaua, scientist-in-charge at the U.S Geological Survey's Hawaii Volcano Observatory (HVO), sited at Kilauea's summit. "One of the remarkable things about Pu'u 'O'o has been the virtual stream of lava from the mantle to our toes for 30 years," he told OurAmazingPlanet.

The HVO now can predict the path of lava flows much like floods. The agency's dense monitoring network of cameras, seismic stations and field sampling also predicts coming upsets, such as Pu'u 'O'o crater's spectacular collapse in 1997.

"We have a much better understanding of the system as a whole," Kauahikaua said. "We know a lot more about the tectonic mechanics of how Kilauea works, about where earthquakes occur and why, and what types of earthquakes occur, and gas emissions and what they indicate," he said.

But Pele, the Hawaiian volcano goddess, still catches scientists by surprise. In 2008, with little warning, plumes of poisonous sulfur dioxide gas heralded the opening of a new vent at Kilauea's summit. With a new lava lake in the summit's Halema'uma'u crater, the past four years have been some of the most fascinating for geologists at the HVO, whose windows overlook the crater.

"I'd be the first to go if it explodes," Kauahikaua said.

Since 2008, the daily, even hourly changes in the height of lava lakes in Halema'uma'u crater, at the summit, and in Pu'u 'O'o crater, have illuminated how magma flows beneath Kilauea.

Many, perhaps most, small pressure changes measured in the summit lava lake are seen 30 minutes to a couple of hours later at Pu'u 'O'o crater, 12 miles (19 km) distant, said Don Swanson, a USGS geologist and former scientist-in-charge at the observatory. [Amazing Images from Kilauea's Lava Lake]

"This is remarkable; Kilauea acts almost like an organism in that widely separated parts of it 'feel' each other," he told OurAmazingPlanet in an email interview.

"The summit magma reservoir drives the show, but Pu'u 'O'o is a willing and active participant," Swanson said.

Scientists also mapped the size and shape of Kilauea's magma pipes, which connect the two craters, by tracking slight swelling and sinking (inflation and deflation) at the volcano's surface, and peering underground with seismic signals and airborne radar. However, the results are confusing. Recent studies have shown that the conduits beneath Kilauea sometimes behave like pipes, and sometimes act like dikes — steeply inclined "blades" of magma.

The knowledge gained from close study of the current eruption helped unmask Kilauea's hidden history, including the volcano's explosive past.

The east rift zone eruption is unprecedented in historic records, but careful mapping of older lava flows shows Kilauea has sent long-lasting flows from its summit in the past.

"The really, really long-lived eruptions, some of which probably went on for hundreds of years, they came from the summit and flowed in all directions," said David Clague, senior scientist at the Monterey Bay Aquarium Research Institute and a former HVO scientist-in-charge.

More concerning is the recent discovery of explosive deposits near Kilauea's summit, some of which may be the remains of superheated pyroclastic flows similar to those that destroyed the forests around Mount St. Helens in Washington in 1980. For the past 2,500 years, Kilauea has been in a period of sporadic explosive eruptions about 60 percent of the time and in a period of sporadic extrusive, or quiet, eruptions about 40 percent of the time, Swanson said.

"Kilauea will be a very different place when it reverts to an explosive period, the latest of which lasted for 300 years between about 1500 and 1800," Swanson said. "The explosive eruption in 1790 probably killed several hundred people, making Kilauea the most lethal volcano in the United States."

One question asked most often at the Hawaii Volcano Observatory is, "When will it stop?" Kauahikaua said he doesn't have a good answer for the next 30 years.

"We've all speculated on what it would take for this eruption to stop — a big earthquake, blah, blah, blah, and they've all happened, and yet the eruption goes on," he said.

Yet Pu'u 'O'o was quieter than usual in 2012, leading some scientists to speculate that another eruptive shift is imminent.

The lava flow crossing the slope below the crater is sluggish, making the trip to the ocean in about six months instead of the previous three, and seismic swarms are shaking the magma conduit between the summit and Pu'u 'O'o, Clague said.

"This suggests that not all the lava is being pumped out, and there is pressure building up in the conduit," he told OurAmazingPlanet. [In Images: Hawaii's Mount Kilauea Erupts]

The most likely result is another fissure eruption from Pu'u 'O'o, but Clague also suspects the next 30 years may bring something more exciting: a return to summit eruptions.

"The volume erupting at Pu'u 'O'o is very small compared to what it was before," Clague said."The only way to keep a conduit system open is to keep lava pumping through, otherwise it's going to solidify. If Pu'u 'O'o shuts down, you've still got a valve open. The eruption will migrate up to the summit and the new vents in the summit will turn into a lava lake," he said. "It will be quite exciting. I hope it happens while I'm still around to see it." [Watch Kilauea's Pu'u 'O'o crater collapse]

In July 1986, the eruption shifted 2 miles (3 km) to a new vent, Kupaianaha, sparking five years of continuous pahoehoe lava flows. A lava pond formed over the vent, and overflows built a broad shield 185 feet (56 m) high in less than a year.

Kauahikaua was a graduate student at the University of Hawaii on the island of Oahu when the fissure tore open on Jan. 3, 1983. The observatory's chief of operations, Reggie Okamura, woke him with a phone call and told him, "Hey, Jim, you might want to come over here."

On the flight to Hilo, the pilot detoured 20 miles (30 km) to fly over the fissure, Kauahikaua said. "He had a 150-passenger jet flying over the eruption area," he said. "We were all just thrilled to see it. We had perfect seats for it."

The eruption's most destructive phase began in March 1990, when lava flows from Kupaianaha consumed Kalapana Gardens, a village on the southeast coast of Hawaii. The entire community, including 100 homes, was buried beneath 50 to 80 feet (15 to 24 meters) of lava. [Explosive Images: Hawaii's Kilauea Erupts for 30 Years]

By 1991, lava output from Kupaianaha was declining and, on Feb. 7, 1992, finally stopped. Ten days later, the activity returned to Pu'u 'O'o. From 1992 through 2003, nearly continuous flows from vents at Pu'u 'O'o sent lava to the ocean and buried more structures in Kalapana. In 1993, collapse pits appeared on the west flank of Pu'u 'O'o as subsidence undermined the cone. When the crater floor dropped in January 1997, the weakened flank collapsed, leaving a prominent gap. On March 5, 2011, the nearby Kamoamoa fissure cracked open, sending a curtain of lava 80 feet (25 meters) into the air. The eruption at Pu'u 'O'o continues today.

On March 19, 2008, the base of the east wall of Halema'uma'u crater at Kilauea's summit blasted out hot, rocky debris, forming a new vent. The summit eruption continues today with a lava lake deep within the vent and a plume of volcanic gases. Collapses within the vent and along its rim enlarged the summit vent from 115 feet (35 meters) in 2008 to more than 500 feet (150 meters) in diameter by the end of 2012.