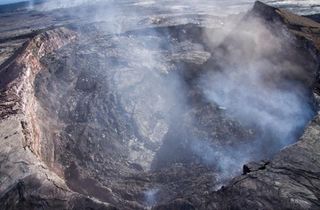 Hawaii's constantly active volcano, Mount Kilauea , is back in action.

Volcanic craters are large holes created by volcanic activity. Inside of craters are vents that erupt lava. A live webcam positioned above the Pu`u `? `? crater caught the latest action, and one viewer created a time-lapse video using the footage.

At the same time as the 40-minute collapse, lava broke out of the Pu`u `? `? cone and began to flow on Kilauea's flanks and drained the lava lake from the crater, according to the Big Think's Eruptions Blog. The lava was near the Kamoamoa Fissure that erupted earlier this year .

The lava flow was also caught on video here.

The crater can be viewed on an Hawaii Volcano Observatory webcam here.

Kilauea is a shield volcano with a low angle and broad shape like the shields used by Hawaiian warriors of the past. Shield volcanoes are usually built from the successive lava flows piling one on top of the other. The volcano's current active period has been ongoing since 1983.